Are Dogs Smarter Than Cats? Science Finally Has a Clue

A new study has some ammunition for dog people everywhere.

The research, published in the journal Frontiers of Neuroanatomy, says dogs may be brainier than cats. That is, dogs have cerebral cortexes with twice as many neurons — the brain cells responsible for thought, planning and behavior – compared to cats. Scientists have associated neuron density with overall cognitive ability – i.e. intelligence.

For the study, a group of researchers led by Suzana Herculano-Houzel, an associate professor of psychology and biological sciences at Vanderbilt University, examined the neuronal density and brain sizes of various carnivorans, a class of mammals that includes many predators – along with some omnivores and and a few herbivores. These animals are of particular interest, according to the paper, because many must outsmart prey to survive, potentially pointing to a higher number of neurons, and thus higher intelligence.

To learn more, the researchers examined the brains of eight mammals: cats, dogs, bears, lions, hyenas, ferrets, mongoose and raccoons. They found that the animals with larger brains also tended to have more neurons, just like non-carnivorans — a similarity that suggest carnivorans aren’t so different from the rest of the animal kingdom, after all.

The results were marked. In addition to dogs’ cortical neurons outnumbering cats’ — to the tune of 530 million to 250 million — they discovered that brown bears had only as many neurons as cats, despite the obvious size difference. Raccoons, on the other hand, had far more neurons than their small brain size would suggest.

A golden retriever that was studied had the most cortical neurons of all, with 627 million.

However, even the researchers admit that their findings shouldn’t resolve the old dogs-versus-cats debate over intelligence.

“While our finding of larger numbers of cortical neurons in dogs than in cats may  confirm anecdotal perceptions of dog owners and animal trainers as well as unpublished reports that dogs are easier to train and therefore ‘more intelligent,’ cat owners would probably protest, and rightly so,” they write.

“Any argument about their cognitive capabilities at this point will be largely a matter of opinion until direct, systematic comparisons of cognitive capacity are performed across these and other species.” 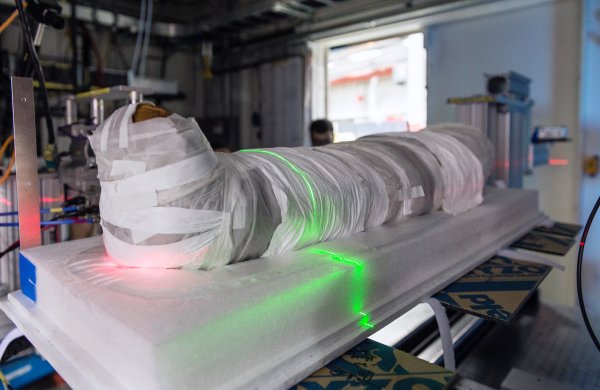 Scientists Are Using a Particle Accelerator to Unwrap a Mummy’s Secrets
Next Up: Editor's Pick