Former Sen. Barbara Boxer predicted that if elected, Alabama candidate Roy Moore will eventually be expelled from the Senate.

The California Democrat, who served in the House of Representatives from 1983 to 1993 and in the Senate from 1993 to 2016, said that based on her experiences in office, Moore would likely face a serious investigation from the Senate Ethics Committee which would eventually lead to his expulsion, a process she says would “devastate” the Republican Party.

“If they send a child molester into the United States Senate, the Ethics Committee will conduct an investigation that will leave no stone unturned,” she said. “They will reveal other issues and Roy Moore will be expelled, and he’ll be lucky if he doesn’t have criminal charges filed after that’s over.”

Boxer has some experience with the issue of sexual misconduct. She attributes her win in 1993 to anger over the Senate Judiciary Committee’s treatment of Anita Hill, who testified that she was harassed by Supreme Court Justice nominee Clarence Thomas. Shortly after she moved to the upper chamber, Oregon Sen. Bob Packwood faced allegations that he sexually harassed at least 18 women, eventually leading to his resignation.

She also voted not to remove Bill Clinton from office during his impeachment trial for lying about an affair with a White House intern. Democratic Sen. Kirsten Gillibrand of New York recently made news for saying that Clinton should have resigned over the affair, but Boxer remained circumspect.

“There was a huge price paid by Bill Clinton for his behavior,” she says. “He will always go down in history books with that shameful asterisk that he was impeached, and it was related to a consensual affair with an intern, which was immoral, as I said at the time. He was not convicted by the Senate because it didn’t rise to the level of a high crime and misdemeanor.”

“I’m not going to tell people what to say or what to do. They do what’s in their heart and in their mind,” she said. “But they pay the price for that if people don’t agree with them.”

But she said the accumulation of sexual harassment scandals in recent years has worn her down, noting former Idaho Sen. Larry Craig, who was arrested for lewd conduct in an airport restroom; and former Rep. Anthony Weiner, who resigned after sending explicitly photos to multiple women; New York Gov. Eliot Spitzer, who resigned over soliciting a prostitute. 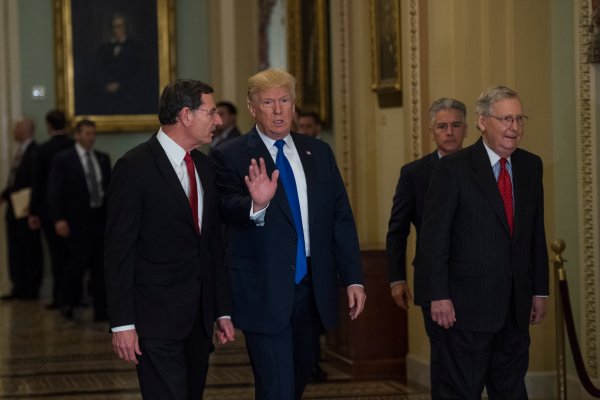 Republicans Move Forward With Tax Bill
Next Up: Editor's Pick