'We Will Take Care of It.' President Trump Responds to North Korea Missile Launch

President Trump said Tuesday that he will “handle” North Korea after the country launched its first ballistic missile in months.

“We will take care of it,” the president told reporters in the Roosevelt Room. “It is a situation that we will handle.”

His comments came after Democratic congressional leaders Chuck Schumer and Nancy Pelosi pulled out of a planned meeting when Trump attacked them on Twitter. Trump spoke to the press later Tuesday afternoon flanked by two empty chairs with Schumer and Pelosi’s name cards on them. The Democrats used to be “all talk, no action,” he said, and now they’re “not even talk.”

Trump wondered if North Korea’s missile launch might bring Schumer and Pelosi back to the table, saying, “In light of the missile launch they will be here fairly quickly.” But he also said a government shutdown would be their fault. “I would absolutely blame Democrats if that happens,” he said.

Trump’s remarks also came as the Senate Budget Committee approved a version of the GOP tax bill. Trump said he has “tremendous support” for the tax plan in Congress and described a meeting with Republican leadership as “very special” and “a lovefest.”

“It goes now the next step,” Trump said of the bill, “and I think we’re going to get it passed and it’s going to be very popular.” 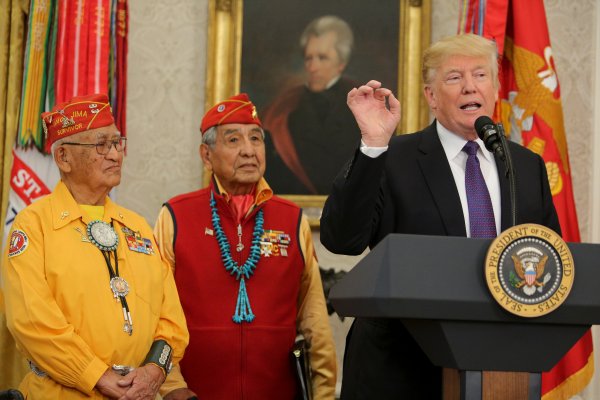