How NDAs Help Some Victims Come Forward Against Abuse

When allegations of Harvey Weinstein’s abhorrent behavior dating all the way back to the 1980s were revealed, many asked how he could have gotten away with it for so long. One answer was the Weinstein Company’s reliance on non-disclosure agreements in its employment contracts, prohibiting staff from speaking out about anything that could harm the reputations of the company and its leaders.

In the weeks since Weinstein’s rampant sexual harassment and abuse allegations were revealed in bombshell reports by the New York Times and the New Yorker, many have called for the elimination of NDAs and confidential settlements, claiming they harm victims by preventing them from speaking out and allow perpetrators to act again. Weinstein settled with at least eight women dating back decades — and went on to allegedly abuse more and more. (He admits to some claims and denies others, including all allegations of non-consensual sex.) The popular argument is that if the women Weinstein settled with hadn’t been prohibited by NDAs from discussing his abuse, others might have been spared.

Lawmakers in New York, New Jersey and California are considering legislation that would limit the use of NDAs in cases of sexual misconduct. This is a mistake.

The impact of NDAs and secret settlements is complicated — and in many ways, ultimately benefits victims. I have represented dozens of women who have experienced workplace sexual harassment not unlike the claims shared by Weinstein’s victims and victims of the others who have been accused in his wake. In many of those cases, my clients were grateful for a confidentiality agreement.

There are very real reasons why victims might prefer to keep their cases confidential. There’s the fear of being retaliated against or ostracized by their employers, potential future employers and even entire industries. There’s concern for how their friends and family might treat them differently, or might themselves suffer from unwanted attention. There’s the completely understandable aversion to undergoing a humiliating and demoralizing public trial. The cold reality is that defendants come after victims hard, smearing their reputations by casting them in whatever negative light they can, often accusing them of promiscuity, gold-digging and flat-out lying. Private settlements protect victims from all the painful ugliness that comes with litigation in the public eye.

Then there’s the matter of financial restitution — which has nothing to do with greed and everything to do with a victim’s ability to continue living without her paycheck, since she’s likely to have been forced out of her job, and to pursue any help she may need as she recovers. Bill O’Reilly allegedly paid $32 million dollars to settle a sexual harassment claim made by a Fox News analyst. Would he have settled at all, not to mention for that amount, without the promise that the story would remain confidential?

And the consequences of breaking an NDA, if the need to speak out overrules the need to honor the contract, is a calculated risk. Breaching such a contract can result in the loss of settlement money and gives the defendant the right to sue — but sometimes, speaking up comes out in the victim’s favor.

Zelda Perkins, a former assistant to Weinstein, broke her NDA in an interview with the Financial Times last month, coming forward to share her story of being sexually harassed while working for the producer in 1990s. Weinstein has not retaliated against Perkins, and it’s fair to assume he won’t — doing so would only further damage his reputation.

Andrea Constand, whose sexual assault allegations against Bill Cosby brought the comedian to trial earlier this year, was sued by the comedian in February 2016 after she shared her story with law enforcement officials. Constand had signed an NDA settling the 2004 claim in 2006. But a federal judge ruled Cosby could not sue Constand for speaking to law enforcement investigators about the accusations (though he did say he could sue her for speaking to a news outlet and writing tweets).

There are some protections already in place for those who would speak out. States like California prohibit the use of confidentiality provisions if the underlying facts could be prosecuted as a felony sexual offense. Some states have similar laws that prohibit such agreements if they conceal facts related to a public hazard. And in Kalinauskas v. Wong, a 1997 sex discrimination case, the plaintiff was allowed to depose another woman who’d been harassed at the same company and signed a confidentiality agreement. The decision set a precedent used in future federal court decisions that confidential settlement agreements can be discoverable in litigation involving the same employer when similar facts are alleged.

Yes, NDAs prevent the public from knowing about predatory conduct that harms us and stop government officials from being able to perform critical law enforcement duties that are designed to protect us. And by concealing sexual harassment and abuse, we lose the deterrent effect that results when we shine a light on offenders.

But we cannot ignore the practical reality of the fear, intimidation and destruction that come with publicly exposing victims. By passing laws that ban all NDAs, we will marginalize rather than empower the people we’re aiming to protect. Many of my clients would never have come forward if they knew the only option was full public disclosure of their experiences. And what matters most is that women and men who experience sexual harassment feel free to seek justice, whether public or not. 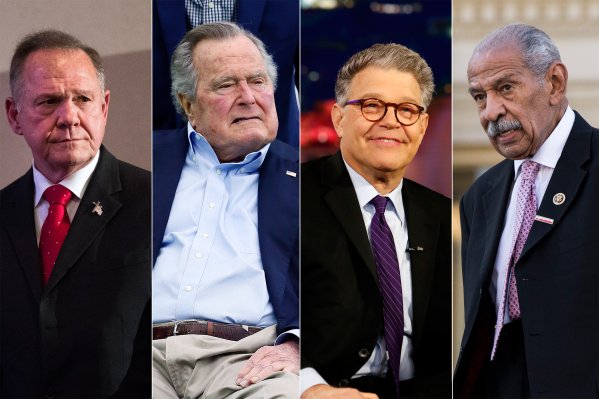 These Are All The Politicians Recently Accused of Sexual Harassment
Next Up: Editor's Pick