'We, Too, Are Survivors.' 223 Women in National Security Sign Open Letter on Sexual Harassment

More than 200 women who work on national security for the U.S. signed an open letter saying that they have survived sexual harassment and assault or know someone who has experienced it.

Signed by current and former diplomats, civil servants, servicemembers and development workers, the letter calls for stronger sexual harassment reporting, mandatory training and outside data collection on how often it occurs.

“This is not just a problem in Hollywood, Silicon Valley, newsrooms or Congress,” reads the letter, which was shared with TIME. “These abuses are born of imbalances of power and environments that permit such practices while silencing and shaming their survivors.”

The open letter is titled #metoonatsec, a reference to the “Me Too” movement which sprung up on social networks in October over sexual harassment in the aftermath of explosive reports about Hollywood producer Harvey Weinstein’s years of abusive behavior, along with allegations about other notable men.

“Assault and harassment are just as much as a problem for women working on the night-shift cleaning offices as it is for diplomats,” says retired Ambassador Nina Hachigian, who co-authored the letter with former State Department official Jenna Ben-Yehuda.

Signatories to the letter include 223 women who have served across the federal government — in the State Department, in the intelligence community, at USAID, and at the Pentagon — and at institutions within the national security space who all say that they have either witnessed or survived harassment and assault.

No specific allegations are outlined in the document, which Ben-Yehuda and Hachigian began sharing with their networks last week, but the former officials say many used it as an opportunity to open up about their experiences.

Still, some instances of harassment within the national security community have already been made public, such as the private Facebook group that Marines used to share naked photos of female service members, or the incidents former Ambassador Gina Abercrombie-Winstanley detailed in an interview for the July/August 2017 edition of the The Foreign Service Journal.

“There was one occasion in the department when a boss touched me and I told him if he did it again, I’d knock the s— out of him,” she said. “He did not repeat it, but he did try to get me to curtail from the position.”

In sharing the letter with their respective networks, both women say the stories they’ve heard were not unlike the stories that have been shared by women in Hollywood and in media. The current and former ambassadors Hachigian connected with through the group she co-founded, Women Ambassadors Serving America, voiced concern about how vulnerable women in contract support positions and locals who are hired to work in U.S. embassies can be.

Ben-Yehuda,who served in the State Department from 2001 until 2013 and founded the Women’s Foreign Policy Network, says that she has never experienced harassment herself, but recalls being told to avoid being alone with certain colleagues early in her career.

“I think that this national conversation has led a number of us, even those of us who haven’t been the direct victims of assault to really harken back to moments like that and realize what a toxic environment even comments like those can create,” she says.

Both women also say that many of the people they have heard from said that they tried to report the misconduct they faced or attempted to work through existing systems, but were left feeling like their voice was not heard. Even worse, says Ben-Yehuda, some said they felt like they became a “problem child” after coming forward. “Certainly didn’t create an environment that was conducive to coming forward,” she says.

To be clear, the federal departments and agencies that are named in the letter have sexual harassment policies in place, as required by federal law.

Within the Department of Defense, anti-sexual harassment training, data collection, oversight, and analysis is handled by the Office of Diversity Management and Equal Opportunity. The Department also keeps track of the number of sexual harassment complaints it receives and how offenders are punished. According to the Fiscal Year 2016 Department of Defense Sexual Assault report, the Military Services and National Guard Bureau received and processed 601 sexual harassment complaints; by the end of the fiscal year, 363 of the 415 alleged offenders had been disciplined and punishment was pending for the remaining 52.

U.S. Army Major Dave Eastburn, a Pentagon spokesman, told TIME via email: “There is NO room for sexual harassment within the Armed Forces and the Department of Defense. Sexual harassment violates the responsibility of DoD military and civilian personnel to treat each other with dignity and respect. Not only that, it jeopardizes combat readiness and mission accomplishment, weakens trust within the ranks, and erodes unit cohesion. The DoD maintains a ‘zero-tolerance policy’ for sexual harassment and is firmly committed to eliminating it from our ranks.”

The State Department’s anti-harassment policies are posted on the Department’s internal and external websites. Those policies are also discussed at employee trainings and included in the Foreign Affairs Manual, according to an official. The Secretary of State also release statements on diversity and harassment to the entire workforce at the beginning of their tenure. An official says that statement is reviewed annually.

According to an official, the State Department reviews its anti-harassment policies on an ongoing basis and the recent scandals have provided the office “an opportunity to assess its anti-harassment program and determine that additional resources are necessary to ensure that each report and allegation receives attention.”

The Department of Homeland Security has an Anti-Harassment Unit that “ensures that Headquarters DHS employees are aware of the DHS Anti-Harassment Directive through training as well as through information on the DHS intranet site.” Training is mandatory for new hires and conducted regularly as a part of DHS’s compliance with a 2002 law that protects federal employees from discrimination and retaliation. Also, that Anti-Harassment unit tracks complaints that are reported to the Equal Opportunity Commission. The department is also reviewing its current policies in light of recent scandals “both to further reinforce its policies to employees, as well as to remind employees on how to file a harassment complaint.”

“As Acting Secretary, I will not tolerate workplace harassment of any kind, and together with DHS leadership will continue to ensure any and all reports of intolerable behavior are addressed swiftly and in accordance with our laws and department policies,” Acting Secretary Elaine Duke told TIME in a statement. “DHS employees are expected to treat everyone they encounter with respect and professionalism – including their coworkers.”

The National Security Council is a component of the Executive Office of the President, which has a policy against sexual harassment and discrimination, but because NSC staff includes personnel that is detailed from other departments and agencies, those staff members must also comply with the training and anti-harassment policies of their home agency.

An NSC spokesman says it conducts recurring Workplace Harassment Training to address both sexual harassment and other improper workplace conduct. Its last training for managers and employees was conducted in June of 2017. Another training has been scheduled for December and January so that NSC can meet its “semi-annual training objective.”

The women behind the letter also note that reporting mechanisms exist, but call training “erratic” and “irregular” and say policies often go unnoticed among staff.Theletter calls for a number of reforms including a clear indication that leadership will not tolerate certain behavior, the creation of “multiple, clear, private” channels to report abuse without fear of retribution, and regular mandatory training for employees. The letter also demands external data collection of abuse claims and mandatory exit interviews for women who leave federal service positions.

“I think the more we know about the women in this space and their decision to stay or to leave, the more effectively we can work to put policies in place to stop it,” says Ben-Yehuda.

The also letter suggests that the spectrum of harassment that women face — from inappropriate comments and behavior to unconscious bias in promotion and hiring — could be keeping them from ascending to leadership positions at the federal agencies that deal with national security.

“Many women are held back or driven from this field by men who use their power to assault at one end of the spectrum and perpetuate-sometimes unconsciously-environments that silence, demean, belittle or neglect women at the other,” the letter reads.

According to an April 2017 Center for a New American Security report on Women in National Security, although they are underrepresented in top positions, women have made up a “stronger and more visible portion of the national security establishment” since 9/11.

In 2015, the report found, five out of 24 under and assistant secretary positions at the Pentagon were held by women. That same year, women made up 16 out of 34 of deputy, under, and assistant secretaries of state. Women also make up 15% of active duty military— up from 11% in 1990— according to Pew and around 7.1% of all U.S. military generals and admirals are women. In November 2016, three of the 11 National Security Council members were women, as were six of the 11 deputy committee members, according to CNAS.

The letter’s authors hope that conversations that are sparked as a result of them going public will lead to more data and better answers: the more that is known about composition of women in this space and their decision to stay or to leave, the more effectively leaders can put policies in place that aimed at curbing attrition, they say.

And like many who have begun to speak out on the issue of sexual harassment in the workplace, Hachigian and Ben-Yehuda acknowledge that policies alone may not be enough; to change behavior, the culture of what is and is not tolerated should change, too.

“Everybody can be a leader on this, no matter what your rank or what your position there are so many opportunities to set the tone to create a workplace that is safe and more inviting for women,” says Ben-Yehuda.

Adds Hachigian, “it’s about doing what is right for women, but also about improving foreign policy.” 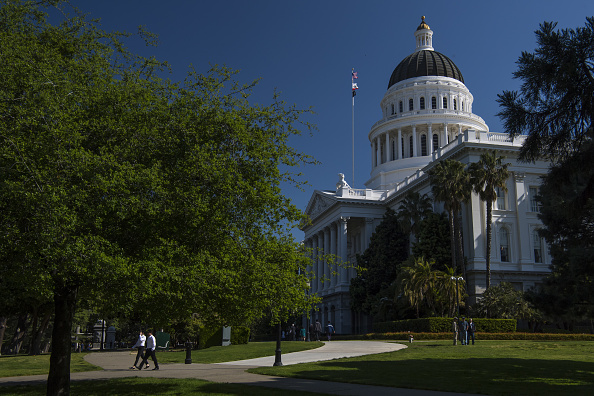 It's Not Just Congress. Sexual Harassment Plagues California Legislature Too
Next Up: Editor's Pick