Senator Elizabeth Warren said President Trump “stooped to a disgusting low” when he referred to her as “Pocahontas” at a White House event honoring Navajo veterans Monday.

“Today, he stooped to a disgusting low,” wrote Warren in an email to her supporters. “This afternoon, in the Oval Office, Donald Trump was supposed to be honoring Navajo code talkers — American heroes who helped save the world from fascism and hate during World War II. Instead, Trump stood right next to those Native American war heroes and came after me with another racist slur.”

Trump did not name Warren during his address, but he has used the term as a nickname for the Massachusetts Democrat in the past.

“I just want to thank you because you are very, very special people. You were here long before any of us were here,” Trump said at the event. “Although, we have a representative in Congress who has been here a long time…longer than you — they call her Pocahontas!”

Pocahontas was the daughter of an indigenous chief from the 17th century whose name Trump has used to disparage Warren, whose claim of Native American ancestry has been questioned by the president.

In an interview with CNN late Monday, Warren said she “really couldn’t believe” Trump made the remark, claiming it was an attempt to create a distraction from other issues surrounding his presidency. 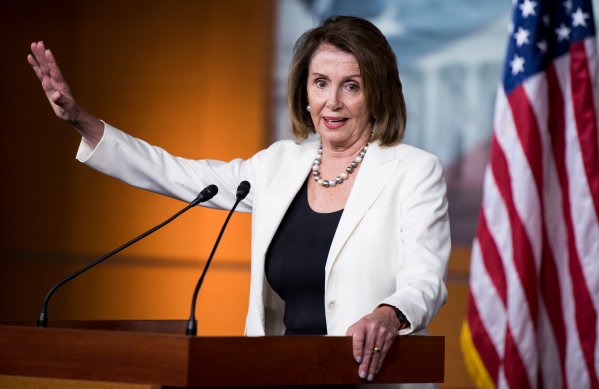 'Unacceptable and Disappointing': Nancy Pelosi Backtracks on Defense of John Conyers
Next Up: Editor's Pick