Roy Moore Has a New Challenger in the Alabama Senate Race

Another contender is jumping into Alabama Senate race, with just 15 days until voters head to the polls.

Lee Busby, a 60-year-old retired marine colonel from Tuscaloosa, Alabama, is launching a write-in campaign as an independent candidate, he announced Monday in an interview with the Washington Post. The election will take place on December 12.

In an interview with TIME, Busby said he believes Alabama voters want a candidate who falls somewhere in the middle ideologically, and they don’t have that choice with the current options, Republican Roy Moore and Democrat Doug Jones.

“Both of the candidates have committed bases but those bases are at the far left flank and the far right flank and I think there is a vast number in the middle that are tired of the divisiveness int he country and will take that option if they’re given the option and thats all I’m doing,” he said.

But Busby, who is a former aide to President Trump’s Chief of Staff John Kelly — he has not yet spoken with Kelly about his campaign — was candid about the fact that he typically votes Republican. He supported Trump in the 2016 presidential election, and thinks the President is doing “a good job.” Should he win, he said his votes will likely align with a Republican agenda, although he stopped short of saying he would caucus with the Republicans.

The Senate Leadership Fund, the Super PAC affiliated with Mitch McConnell that spent millions trying to defeat Moore in the Alabama Republican primary, declined to comment on Busby’s announcement that he was entering the race. McConnell’s office did not respond to a request for comment.

Alabama’s Senate race has garnered national attention after the Republican candidate, Roy Moore, was accused of sexual misconduct by multiple women. The Post reported on November 9 that Moore had pursued teenagers romantically when he was in his thirties, citing on-the-record accounts from four women who relayed their own experiences. Four additional women came forward after that article was published. Moore and his campaign have denied the allegations, categorizing them as politically motivated.

Busby said he didn’t support Moore before the allegations. “The allegations really have nothing to do with [my decision to run]. I didn’t feel like either of the two candidates had the qualifications to appeal to me as a voter for U.S. senate,” he said.

Busby took up sculpting after he retired from the military in 2013, according to an August article in Southern Living that profiled his work; he aims to create sculptures of soldiers killed overseas for the families they left behind.

There are no prerequisites or filings necessary to run a write-in campaign in Alabama,Alabama Secretary of State John Merrill told TIME, but the winning candidate needs to amass a plurality of votes to win. Theoretically, Busby’s candidacy, should it gain traction, could take votes from both Jones and Moore, similar to the way Ross Perot siphoned off votes from George H.W. Bush in the 1992 presidential election.

When asked if that was Busby’s goal, or if he actually thought a victory was attainable, he said he thinks he can win, although he openly acknowledges it is an uphill battle. His campaign staff currently consists of volunteers he quickly asked to help after he spoke with the Post Sunday night. He laughed at the inquiry about campaign rallies and canvassing, explaining he would love to organize them but had not done so yet.

“I have no political organization, no existing big donors and no political experience,” he said. “With 14 days left to go, donors are great, but that’s not the issue. The issue is will Alabama voters have a choice between Roy Moore and Doug Jones? And if they have that choice, will it resonate with them? 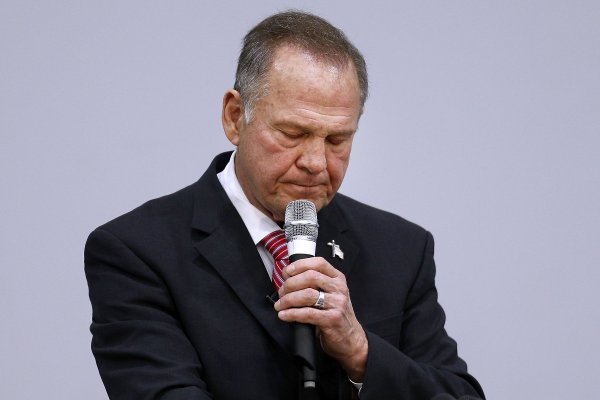 Another Woman Accuses Roy Moore of Groping Her
Next Up: Editor's Pick