This Black Friday saw a new record for gun purchase-related background checks. The Federal Bureau of Investigation reportedly fielded more than 200,000 checks this year, marking a new single-day record, according to USA Today.

The Bureau is reported to have received 203,086 gun background check requests on Black Friday, up from 185,713 in 2016. According to USA Today, the prior record-setting days fell on Black Friday, too.

NPR reports that gun background checks are a decent barometer for overall gun sales because gun sales numbers are kept out of the public. The numbers are not perfect, though. Purchasers only have to undergo one check during a transaction and can therefore buy multiple firearms at once so there may have been more than 203,000 guns sold on Friday.

The National Instant Criminal Background Check System is designed to keep guns out of the hands of convicted felons, domestic abusers and others who are prohibited from owning firearms under federal law. But there are holes in the system, including one that allows buyers getting firearms from unlicensed gun dealers to get around background checks. And while most background checks occur instantaneously, if there is a lag (but not an outright denial), a firearm can still be sold to a purchaser if NICS does not offer an official response within three days. That delay has been dubbed the “Charleston loophole” because that’s how the Emanuel AME Church shooter was able to purchase a weapon.

The surge in FBI gun checks came the same week that Attorney General Jeff Sessions ordered a federal review of the background check system. That review was called in the wake of a church shooting in Sutherland Springs, Texas where a gunman opened fire on a congregation and killed 25 people. The shooter in that case should have been barred from purchasing a gun under federal law, but the Air Force did not send the information about his domestic violence conviction that would have prohibited the sale to the NCIS. 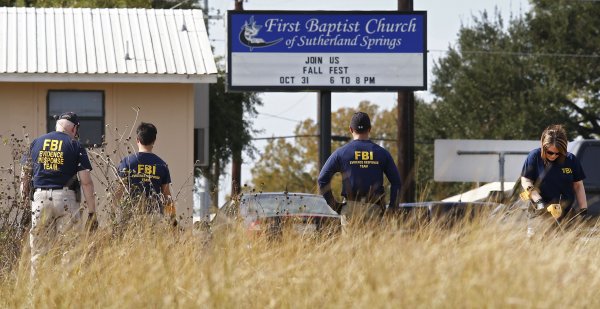 Evangelical Pastor: The Church Should Help Keep Guns From Abusers
Next Up: Editor's Pick