These Are the Best Cyber Monday Deals in Tech

Apple
By Lisa Eadicicco
Each product we feature has been independently selected and reviewed by our editorial team. If you make a purchase using the links included, we may earn commission.

If you didn’t get the chance to go bargain hunting on Black Friday, there are still tons of deals on gadgets like TVs, laptops, and game consoles available for Cyber Monday.

Here’s a look at some of the most compelling electronics discounts from Amazon, Best Buy, Target, and Walmart.

Windows Laptops: If you’re in the market for a new Windows notebook, Best Buy has several noteworthy options available on Cyber Monday. Those on a tight budget might want to check out this $299.99 Dell Inspiron, which comes with with a 15.6-inch screen, Intel Core i3 processor, 1TB of storage space and 6GB of memory.

Apple Mac Laptops: Best Buy also has bargains for Apple fans: The 12-inch MacBook is on sale at a $200 discount, while the MacBook Pro is on sale for between $150 and $250 off depending on the configuration.

55-inch 4K TVs: Best Buy is selling 55-inch 4K smart TVs from Sony and Samsung at a $200 discount from their original price.

Amazon Fire TV Stick With Alexa Voice Remote: Amazon’s streaming stick is already inexpensive, but on Cyber Monday the online retailer is selling it for $24.99 instead of $39.99.

Amazon Echo Plus and Philips Hue Bulb: Amazon is also offering its Echo Plus device, which is designed for smart home control, along with a Philips Hue bulb at a discounted price of $119.99.

Apple Watch Series 2: Apple’s second generation smartwatch is on sale for as low as $269.99 through Target. It’s a particularly good deal considering Apple currently only sells the Series 1 and Series 3 watches, meaning you’d otherwise have to spend at least $329 on a watch with GPS and water resistance.

Canon EOS Rebel T6: Photography enthusiasts can get Canon’s EOS Rebel T6 bundle for $449.99 instead of $749.99 at Target on Cyber Monday. 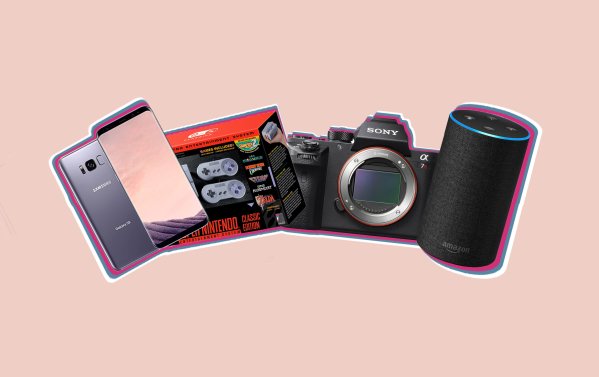