President Trump addressed troops from five different branches of the military in a special Thanksgiving video call on Thursday from his Mar a Lago resort.

He thanked troops for “having the tremendous courage to defend us and to defend freedom.”

Addressing troops stationed in Afghanistan, the President said: “Everybody’s talking about the progress you’ve made in the last few months since I opened it up,” referencing his decision earlier this year to send up to 4,000 more trips to the country — going against his campaign promise to scale back foreign commitments.

“We opened it up, we said, ‘Go ahead, we’re going to fight to win. We’re not fighting anymore to just walk around, we’re fighting to win.’ And you people, you’ve really turned it around in the past three to four months like nobody’s seen and they are talking about it. So thank you very much, brave, incredible fighters.”

Trump’s video message to American troops followed a tweet earlier Thanksgiving morning where he touted his administration’s accomplishments since he was elected.

“HAPPY THANKSGIVING, your Country is starting to do really well,” he tweeted. “Jobs coming back, highest Stock Market EVER, Military getting really strong, we will build the WALL, V.A. taking care of our Vets, great Supreme Court Justice, RECORD CUT IN REGS, lowest unemployment in 17 years….!”

Back in Mar a Lago, Trump reiterated his message to the troops, who were connected to him via teleconference. “We’re being talked about as an armed forces. We’re really winning. We know how to win,” Trump said. “But we have to let you win. They weren’t letting you win before. They were letting you play even. We’re letting you win.”

He also mentioned the ongoing war against terrorism, specifically messaging ISIS. The self-declared Caliphate has been pushed out of most of its key strongholds in Syria recently, though much of the fighting has been done by Kurdish forces and Syrian government forces, with Russian assistance.

“The fight against ISIS, it’s coming our way. Coming our way. Big, big difference. A lot of things have happened. They say we’ve made more progress against ISIS than they did in years of the previous administration. That’s because I’m letting you do your job.” 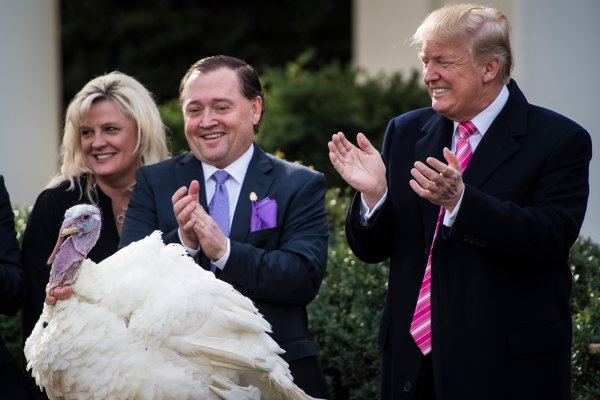