These Wealthy San Francisco Homeowners Lost Their Private Street After They Didn’t Pay Taxes. Now They Might Get It Back

A street sign is posted on Presidio Terrace on August 9, 2017 in San Francisco, California.
Justin Sullivan—Getty Images
By Katy Steinmetz

Michael Cheng says one could compare his controversial purchase to buying a collectible car.

People might spend “a couple hundred thousand dollars and they leave it there, and maybe they don’t make any money with it,” he says. “They just like looking at it.” As rare as old roadsters might be, Cheng, with his wife Tina Lam, bought something much less common. Two years ago, they swooped up one of San Francisco’s most elite private streets — much to the surprise of the people who live there — and on Tuesday, the city’s Board of Supervisors will consider whether to rescind the sale.

In an era when politicians routinely decry the ills of inequality, much schadenfreude has been generated over the purchase of Presidio Terrace, a gated cul-de-sac of multi-million-dollar homes where the likes of Sen. Dianne Feinstein and Rep. Nancy Pelosi have lived in relative privacy. After more than a decade of tax bills went unpaid, having been sent to the address of a now deceased accountant that once worked for the homeowners’ association (HOA), the city put the parcel up for sale in an online auction in 2015. And after eight parties made 140 bids, Cheng and Lam became the new owners of real estate in one of the Bay Area’s most desirable neighborhoods for $90,100.

Cheng, who works as a mortgage broker and real estate investor, and Lam, who works as a product manager at a tech firm, say they didn’t even know precisely what they were bidding on at the time. The South Bay couple had been looking for opportunities to own “a piece of San Francisco,” they say, and took a gamble given the parcel’s tony location, not knowing exactly what it was other than some patch of ground. Only later did they realize what they had bought: the road, including 120 parking spaces, the sidewalks and lush islands of common area that lay among the street’s 35 homes.

Despite past statements that they might consider charging the residents for parking on the street, they say their intention has never been to make money on the investment but to enjoy the pride of ownership. Lam, who came to the U.S. from Hong Kong, says this is especially meaningful for her as a Chinese immigrant, that having her name attached to the property is her “American dream” — even if it might be hard for other people to understand that they’d spend $90,000 to experience a feeling of achievement.

Describing themselves as middle-class “by Bay Area standards,” they argue that the sale was legal and sum up the subtext that made the story go viral after it broke this summer. “Even if the wealth distribution is not fair, the law is fair,” Cheng says, “and that’s something that is comforting to people.” They suggest that the residents should have kept better track of their responsibilities as property owners and balk at suggestions the HOA’s attorney has made about the couple being “opportunistic.”

One onlooker tweeted that the prospect of unsuspecting ultra-wealthy people being at the whims of new landlords was “delicious.” And reporters noted that in the early 1900s, a racial covenant banned non-white people from owning homes on Presidio Terrace, a private development that has been managed by the homeowners since 1905. The hearing on Tuesday, Lam says, threatens to “steal” their property through political process. “We’re not even talking about their driveway,” she says, arguing that their ownership has had no material impact on the people who live there. “They are still driving on our street right now.”

Things look different from the other side of the pavement. A board member of the HOA, who asked that TIME not use her name to protect the privacy of her family, says that the portrayal of the neighborhood is not accurate and that “to have our property sold without us even knowing is both unconstitutional and unfair.” San Francisco Treasurer Jose Cisneros has maintained that the sale was done by the book. His office also acknowledges that when the HOA was sent a notice of the auction by certified mail, that notice was returned to his office as undelivered — an indication that previous bills and notices did not reach them either. “They knew we didn’t get it,” the board member says, adding that the sale “never should have happened.”

In a brief filed with the Board of Supervisors, lawyers representing the Presidio Terrace Association argue that rescinding the sale is the lawful thing to do. “Before the government sells a piece of private property, should it make a reasonable effort to notify those who have an interest in that property? Of course, the answer is ‘yes.’ That is what principles of fairness and due process require,” the brief reads, emphasizing that this is the case “whether the government is dealing with the powerless or the privileged.”

Among the residents of Presidio Terrace are people who own $10-million mansions. There are also multi-generational families, families of immigrants and thirty kids who walk and bike around the manicured cul-de-sac that the homeowners pay to maintain, the board member says. She acknowledges that they did default on taxes that totaled $994.77 (about $14 a year plus fees) but says they would have been happy to pay if they had known about the bill and that residents have been investing in upkeep and maintenance.

“In all of this time, we as individual homeowners were all paying our property taxes and we also invest significantly in the property every year,” she says. “We maintain the road, the landscaping, we recently replaced a palm tree … We’ve been great stewards.”

“It’s a place where our children can grow up feeling safe and free,” she adds. “We’re real people, and however we got there, we’re a very strong, cohesive community.” She describes news vans and helicopters hovering around their homes after the story broke and says that since the sale became public, the street has become “a frequent destination for the curious.” She also argues that there is a problem with having the street owned by people whose interests might not be aligned with those of the individuals who use that street every day.

Both parties confirmed to TIME that they had multiple meetings and discussed the possibility of a settlement, but they did not agree on the value of the street. The HOA board member says the notion that the couple has no intention of making money on the purchase “is not consistent” with the impression she got during those meetings. Cheng maintains that during the meetings “we were consistent that we just wanted to own the property and not do anything to it,” though they did discuss valuations. A title company that contacted the HOA earlier this year did ask about the possibility of homeowners buying the street back, but Cheng says that was done in “error.”

Another twist to this tale is that failing to pay taxes is a mistake the HOA has made before, temporarily losing ownership of the street after defaulting on their bill in the 1970s. In a brief, the treasurer says it is the responsibility of taxpayers to keep their addresses updated with the city. He also notes that the Board has authority under the tax code to rescind the sale — something that is noted in the small print accompanying online auctions — and that his office will “implement the direction it receives from the Board of Supervisors on this matter.”

Sen. Feinstein wrote a letter to the board in advance of the hearing urging it to reverse the sale, saying that she was not attempting to influence their decision because she counts some residents of Presidio Terrace among her friends but because the city’s bureaucracy slipped up. As tax bills went unpaid and unacknowledged for years, the treasurer’s office was “continually informed by the apparently decades-long feedback loop that the wrong address was still wrong,” the lawmaker writes. The “office’s insistence that taxpayers were wholly to blame for that office’s own fiasco was breathtaking.”

If the sale is canceled, Cheng and Lam say that it will be proof that powerful people get their way in an “unfair system.” The residents of Presidio Terrace, who paint the tax collector as the real villain in this drama — saying that office has subjected both sides to an “insufficient process” — maintain that justice will have been done. The HOA previously filed a lawsuit over the sale of the street with the San Francisco Superior Court, to ensure that the property was not sold to someone else as they pursued action with the board. In advance of the hearing, Cheng and Lam say they are willing to continue pursuing this through the courts if the hearing doesn’t go their way.

The people who live on Presidio Terrace are also determined to get their street back. “This is our neighborhood, this is our street and our sidewalks, this is in a 112-year-old community, and it was sold without the knowledge of 35 homeowners,” the board member says. “So people can make it whatever they want. But it’s a really serious issue for the homeowners.” 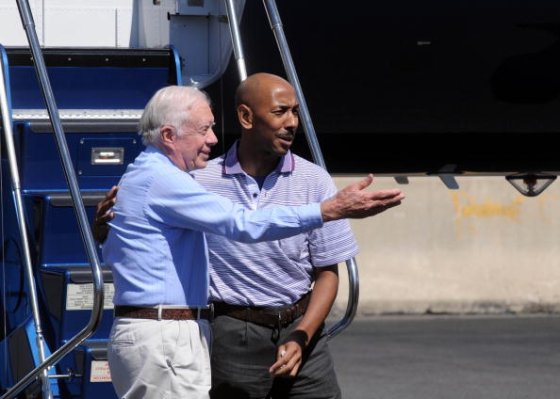 Former Prisoner of North Korea Burned to Death in California
Next Up: Editor's Pick