Pop singer Melissa Schuman has accused Nick Carter of the Backstreet Boys of raping her about 15 years ago at his California apartment, where she said he forcefully took her virginity.

Schuman, one of four members of the girl group Dream, detailed the incident in a blog post earlier this month, saying she was 18 when Carter invited her over to his Santa Monica apartment to hang out and drink with a small group of friends. The two were cast in the same movie at the time.

Schuman said Carter took her to his office to listen to music he was working on. When they began kissing in the dark, Schuman said, Carter moved them to a nearby bathroom, picked her up, put her on the bathroom counter and started to unbutton her pants.

In a statement Wednesday, Carter said he was “shocked and saddened” by Schuman’s allegations, adding that this was his first time hearing about her accusations in nearly two decades. “Melissa never expressed to me while we were together or at any time since that anything we did was not consensual,” Carter said. “We went on to record a song and perform together, and I was always respectful and supportive of Melissa both personally and professionally.”

“It is contrary to my nature and everything I hold dear to intentionally cause someone discomfort or harm,” he added.

Schuman said Carter, 22 at the time, was aware she was a virgin with conservative Christian values but still continued to perform oral sex on her in the bathroom. “I told him to stop, but he didn’t,” she said.

After somebody in the apartment knocked on the bathroom door, Schuman said Carter then took her to another bathroom, where he took off his pants and convinced her to perform oral sex on him even after she said she declined. “I felt scared and trapped. He was visually and clearly growing very angry and impatient with me. I couldn’t leave,” she said.

Carter, Schuman said, then brought her to the bedroom, threw her on the bed and “climbed on top” of her. She repeated that she was a virgin who was saving herself for marriage, to which she said he replied: “I could be your husband.”

“Then I felt it,” Schuman recalled. “He put something inside of me. I asked him what it was and he whispered in my ear once more, ‘It’s all me, baby.’ It was done. The one thing I had held as a virtue had been ruined. I went limp, turned my head to my left and decided I would just go to sleep now.”

When her friend woke her up early the next morning, Schuman said she left without seeing Carter, who she ignored for weeks after until the two singers had to perform a duet together in an uncomfortable and somewhat hostile encounter.

After a hiatus, the Backstreet Boys are now performing together and have a show in Las Vegas. Last year, Dream was part of a reunion My2K Tour with boy bands 98 Degrees and O-Town. The girl group rose to fame in the early 2000s after their hit, He Loves U Not.

Schuman said she had tried to come forward shortly after the incident but was discouraged because of Carter’s powerful attorney at the time. She had also just entered the music scene and didn’t want to ruin her career. She came forward this month, encouraged by the dozens of victims of sexual assault who have shared their stories and named their alleged abusers.

“I feel I have an obligation now to come forward with the hope and intention to inspire and encourage other victims to tell their story,” Schuman said. “We are stronger in numbers.”

“I am free now,” she said in a tweet on Tuesday. 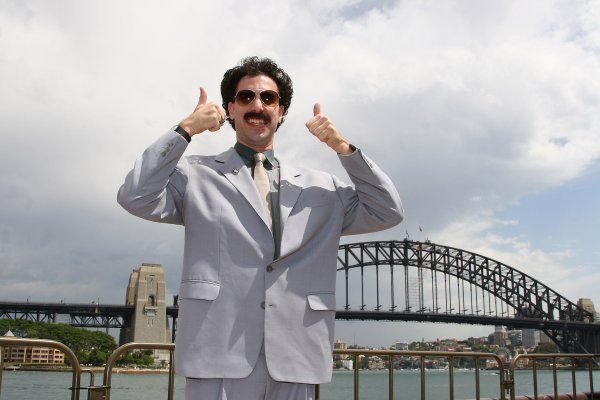 Borat Actor Offers to Pay Fans' Fines in Kazakhstan
Next Up: Editor's Pick