Fikret Alic holds a copy of the Aug. 17, 1992, cover of TIME—on which he appeared—outside the trial of former Bosnian Serb military commander Ratko Mladic in the Hague on Nov. 22, 2017. The United Nations' Yugoslav war crimes tribunal convicted Mladic of genocide and crimes against humanity, and sentenced him to life in prison.
ITN/REX; Michael Kooren—Reuters
By Tara John

The saga of Fikret Alic, who became a symbol of the atrocities endured by Bosnian Muslims during the 1992-1995 war, continued this week as Alic waited at the Hague for the verdict on Ratko Mladic, the ex-Bosnian Serb general accused of ordering a massacre of around 8,000 Muslim men and boys at Srebrenica. On Wednesday, Mladic was sentenced to life in prison and found guilty of 10 counts of war crimes, crimes against humanity and genocide.

As shown in a snapshot shared by BBC journalist Matthew Price, Alic brought something special with him while he waited for that news: a copy of the Aug. 17, 1992, issue of TIME.

The TIME cover shows Alic as an emaciated man, with protruding ribs and a hollow face, standing behind barbed wire. The picture was taken more than 25 years ago as he languished in Trnopolje camp, which was a Serb-controlled prison. “No one anywhere can pretend any longer not to know what barbarity has engulfed the people of the former Yugoslavia,” the story proclaimed.

At the time, a separatist Serb government was fixated on removing all non-Serbs from areas in Bosnia. During that campaign, close to 45,000 people were killed or went missing.

In 1992, British journalists, including a film crew from the news network ITN and the Guardian‘s Ed Vulliamy, were invited to visit Omarska camp by Radovan Karadzic, the former Bosnian Serb leader who would go on to be convicted of genocide, war crimes and crimes against humanity. At the time, Karadzic denied that it was a concentration camp and asked the reporters to witness it for themselves. But while there, journalists stumbled onto Trnopolje after leaving Omarska camp and found gaunt Muslim men and boys clinging onto life. Prosecutors say thousands of Muslim men and boys were massacred, tortured or died of starvation in a number of facilities run by the separatists.

That August, ITN broadcast the first images from Trnopolje, where Alic was being held. He had arrived in that camp the very same morning reporters met him. He had previously been held in another facility, Keraterm, where 130 men were massacred in a hangar. Fikret told The Guardian that he had been ordered to put the bodies onto a bulldozer.

Nearly twenty years later, Fikret said that the image of him had catastrophic consequences for the camp’s inmates. “After you left me behind,” he told former ITN journalist Penny Marshall in a 2011 interview in the London Times, “the guards started to beat some of those you’d spoken to straight away. They came back for me later, once the photo had been published. They wanted to kill me.”

His brothers helped him survive, he has said, by hiding him in the sprawling camp. He managed to escape days later by disguising as a Muslim woman and getting into a convoy of buses that was taking women out of Serb-held territory. Four days after his escape, more than 200 men were carted off in buses and executed at the edge of a ravine. One of the victims was Alic’s cousin, Mujo Alic. The war killed more than 20 members of Alic’s extended family, including his uncle and aunt who were burned alive in their homes and his grandfather who was shot dead in his kitchen.

Outside the camp, the images met with a different response. The horrific photographs and accounts inflamed public outrage. “I never thought I’d see another holocaust in my life,” remarked Former British Prime Minister Margaret Thatcher, amid a renewal of diplomatic maneuvers. By 1995, the Dayton peace accord ended the four-year conflict that was begun by Serbian leader Slobodan Milosevic.

The image also ended up sparking controversy. In 1994, Foreign Policy magazine published an article by Peter Brock that, years after it was published, attacked TIME for the cover photo. He claimed the picture showed a Serb, not a Muslim, suffering from tuberculosis. Brock claimed the man was being held on looting charges. TIME denied the claim and Brock admitted that he had mistakenly challenged the issue, as TIME explained in a note to readers:

Fikret went on to gain asylum in Denmark. In a 2008 interview with The Guardian, he said that he was saving money to rebuild a family home in the town he had been chased out of in 1992. 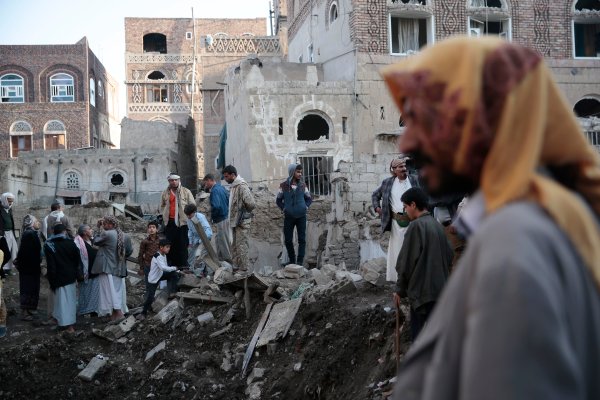 Yemen Could Be Out of Food in Six Weeks, Aid Official Warns
Next Up: Editor's Pick