'It's John's!' Chrissy Teigen and John Legend Are Expecting a Second Child

Luna Simone is going to be a big sister!

Chrissy Teigen and John Legend — who celebrated their fourth wedding anniversary on Sept. 14 — are expecting their second child, she shared on social media Tuesday, hilariously captioning the video, “It’s John’s!”

“Luna, what’s in here?” Teigen can be heard saying in the background of the clip, with baby Luna pointing at her mom’s stomach and saying, “Baby!”

Legend — who commented jokingly on his wife’s Tuesday post with, “Maury will have the final word on this” — spoke to PEOPLE Friday, revealing the couple were “working on” baby No. 2 and that “hopefully it will be soon.”

As far as Luna’s big-sister capabilities? “I have no idea,” said the singer, adding, “She is very sweet and she likes to share, so hopefully that will translate.”

The model mama-to-be opened up to E! News earlier this month about adding to her family, staying mum on her pregnancy but hinting that a new baby might be coming sooner rather than later.

“We’re still trying … I’m going for, I mean hopefully in the next few years, because for me I really want to just knock ’em out,” Teigen said, adding that she’s feeling “good.”

Teigen has been candid in the past about her and her musician husband’s journey toward conception with now-19-month-old Luna, revealing in February 2016 that the couple chose to implant a female embryo during the in vitro fertilization round that resulted in the pregnancy with their daughter.

“The first little girl didn’t work, and then the second is Luna,” she told InStyle for their November cover story, explaining that she and Legend started with 20 embryos, but that number was narrowed down to three after screening and based on what was “going to be good for [my] body.”

The sex of the couple’s second child on the way is unconfirmed at this point, but a son wouldn’t be a surprise. In January, they spoke with Entertainment Tonight at the 28th Annual Producers Guild Awards, where Teigen said with a smile, “A little boy is next, for sure.”

The Lip Sync Battle host, 31, later clarified her comments on Twitter, writing, “Since this is coming up again, I said our next baby would be a boy because that is the embryo we have left. A boy. So. Yeah.”

The proud parents, whose baby girl has joined them on the road for Legend’s Darkness and Light Tour, have been open in the past about both the ups and downs of how having Luna has changed their lives.

“Diapers on the bus, a crib on the bus — a long way from my bachelor days,” the soon-to-be father of two, 38, told PEOPLE in April with a laugh, adding that the spouses’ time prioritization has shifted completely since they became a family of three.

“There are some things that I would’ve said yes to before that I say no to now,” the Tony, Grammy and Oscar winner explained. “And there are some choices that I’ll make now that I wouldn’t have made before.”

Meanwhile, model, television personality and cookbook author Teigen has dealt with her fair share of unwarranted criticism from people on social media, which she has stood up against multiple times in the name of supporting her fellow moms.

In April, the star opened up about her battle with postpartum depression in a candid essay for Glamour, citing her well-known goofy personality and divulging to her readers that the condition “does not discriminate.”

“I have really good days and really bad days, and I don’t tend to talk about the really bad days. But I would hate for people to think those days didn’t exist,” Teigen said in her InStyle November cover-story interview, noting of her initial reaction to her experience, “I thought I was just being a selfish a–hole.” 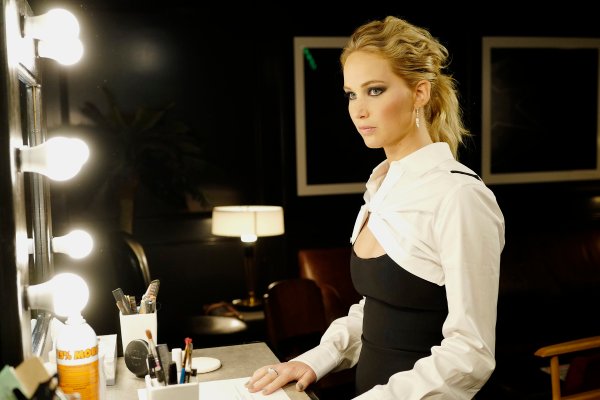 'I Feel Like I Got Gang-Banged.' Jennifer Lawrence Opens Up About Nude Photo Hack
Next Up: Editor's Pick