Ghafek Aiad Alsaho, a Syrian migrant, looks through the window of a police bus after border guards caught him crossing illegally from Serbia into Hungary on his way into the European Union in Roszke, Hungary, on Aug. 29, 2015.
Yuri Kozyrev—NOOR for TIME
By Simon Shuster / Berlin

On Monday morning, as they watched German Chancellor Angela Merkel announce her failure to form a new government, the Alsaho family of Syrian refugees understood their small role in the Chancellor’s troubles. They sympathized with her – the leader whose openness toward refugees they have always admired. But they feared what her predicament would mean for their chances of making Germany their home.

One of the main issues that blocked Merkel’s efforts to form a coalition government was the treatment of families like the Alsahos, who have been split and scattered across two continents by the Syrian civil war. Once they are granted asylum in Germany, should such refugees be allowed to invite their relatives to join them from abroad? Or should such families be kept apart?

It’s a question that Merkel’s would-be partners in the coalition couldn’t resolve even after a month of tense negotiations. Among the four political parties involved in the talks, only one of them – the left-wing Greens – have wanted to allow the so-called “family reunifications” for refugees in Germany. Merkel and most of her conservative allies have sought to restrict the practice, in part by capping the number of new refugee arrivals at 200,000 per year.

“I think it’s all the pressure she’s under,” says 24-year-old Ghafek Alsaho, who was the first of his family to arrive in Germany in the fall of 2015. “I don’t think she’s doing all this because she believes in it.”

Politically, Merkel doesn’t seem to have much choice. Her decision to allow more than a million asylum seekers into Germany in 2015 was the costliest move of her political career. Her approval ratings plunged as a result. And at the peak of the refugee influx, the government estimated that allowing new arrivals to bring their families into Germany would double or triple their numbers.

The Alsaho family is a case in point. Virtually all of them were forced to leave Syria as the civil war intensified in 2014 and ISIS besieged their hometown of Deir ez-Zor. Traveling alone or in small groups, they wound up in different shelters and hideouts in Turkey, Iran, Lebanon and anywhere else they could find refuge. But over the past two years they have slowly been reunited. Out of the family’s seven siblings, five have found their way to Germany, with four of them settling in the port city of Hamburg and one sister living with her husband in Cologne.

What seems most amazing about their arrival – usually in groups of two and three – is how the German government has formally tried to prevent it while still allowing ways for it to happen. None of the Alsahos used the government’s official program for family reunification, which has been suspended since the end of 2015. But they have found ways to reach Germany regardless.

On Nov. 16, just a few days before Merkel’s coalition talks broke down, two more members of the Alsaho family – 17-year-old Jilan and her younger brother Belal – made it to Germany. Their relatives in Hamburg had convinced a German family to sponsor their visas. Now, only one of their surviving brothers remains in Iran. The other was killed in a Syrian prison at the height of the civil war.

“So it’s a mix of feelings,” says Ghafek, who has become the family breadwinner and integration specialist. (Two years into his life in Hamburg, he is already fluent in German, has a job in online marketing and is doing an apprenticeship in software engineering.) “We thank God for the ones who could come here,” he says, “and we worry and remember the ones who have not.”

They realize Merkel can’t help all of them. As she campaigned for another term in office this summer and fall, her policy of openness toward refugees drove many of her conservative supporters to embrace the far-right movement known as Alternative for Germany, or AfD, whose platform calls for a total ban on reuniting refugee families. Still, the chancellor has refused to side with the right on this issue.

Instead she has tried to stay on the fence. During a press conference in August – at the height of her reelection campaign – she said that she would only address the question of family reunifications next year – well after the vote. She maintained that position – or, rather, lack of a position – even after the public appeared to turn against her. A nationwide survey published at the end of August showed that a majority of respondents (58%) had sided with the right wing on this issue.

The election results reflected that. Merkel’s political party, the Christian Democratic Union, got only 33% of the vote on Sept. 24, its worst showing since 1949. Support for the AfD meanwhile surged fourfold across the country to around 13%, giving the nationalists 94 seats in parliament.

Merkel’s rightward drift accelerated after that. One of her first major steps in trying to form a new government was meant to appease her most conservative allies in Bavaria, who had long demanded a harder line on refugee families coming to Germany. The Chancellor yielded to many of their demands, including a provision that indefinitely halted family reunifications for all refugees who have not been granted permanent asylum.

But that compromise did not save her attempts to form a government. Nor does it seem likely to stop refugees from reuniting with their families sooner or later. Germany learned that lesson long ago. During the 1960s and ’70s, vast numbers of Turkish people arrived as part of a program for temporary guest workers. Many of them stayed, brought their families over from Turkey and formed what is now the largest ethnic minority in Germany. One of them, Cem Özdemir, the son of a Turkish guest worker, represented the Green Party during the coalition talks with Merkel this month; he is reported to be in the running for the government’s next Minister of Foreign Affairs.

With any luck, an Alsaho might one day attain such heights as well. The youngest member of their family in Germany today is 6-year-old Omar, who arrived with his grandmother in early 2016, having crossed from Turkey to Greece on a rubber boat before traveling overland through Europe. But that path to Germany, known as the Balkan route, was closed to migrants and refugees soon after, leaving both of Omar’s parents behind in Iran. “So they just talk on Skype when it’s possible now,” says Ghafek, who is Omar’s uncle. “We just hope we will see them in Germany soon.” 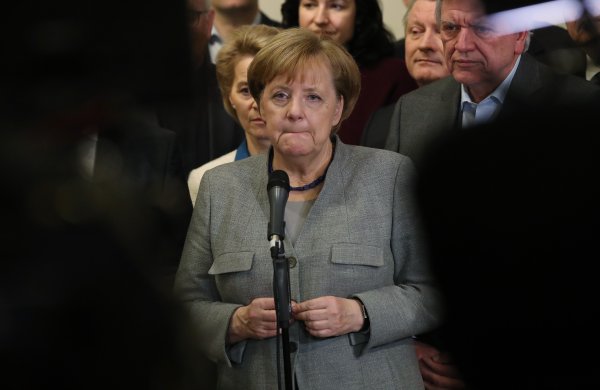