Light Pollution Is Getting Worse Every Year. That's Bad For Your Health

Nothing has captured the march of wealth and progress like any society’s ability to light up the night—first with campfires and torches, then with gas lamps, finally with incandescent lights. Franklin Roosevelt’s 1936 Rural Electrification Act was an effort both to bring modernity to the 90% of American farms that lacked electricity and to help jolt the American economy, which was still deep in the Depression. The modern nighttime image of the Korean peninsula as seen from space, with darkness north of the 38th parallel and brilliant light in the vibrant south, powerfully captures the connection between civilization and illumination.

Now, however, a new study of satellite images, published in Science Advances, suggests that we may have taken an undeniably good thing too far. The nighttime face of the planet is getting brighter and brighter, and that may be doing significant harm to the health of human beings, animals and the ecosystem as a whole.

If the global glare is growing, it’s no secret why. Suburban sprawl in the U.S. and other developed countries is gobbling up once dark, quiet expanses of land, while explosive growth in China has been producing entirely new cities in what was once empty countryside. The switchover from traditional sodium vapor street lights to LEDs has brightened things further, with yellow-gold urban lighting giving way to a brighter blue-white. And since LEDs are more energy efficient and therefore cheaper to operate, places that could get by without much lighting before are now being fully illuminated.

To determine just how extensive the brightening of the night has become, a team of researchers —led by physicist and ecologist Christopher Kyba of the German Research Center for Geosciences in Potsdam —reserved time to use America’s Suomi NPP satellite, jointly operated by NASA and the National Oceanic and Atmospheric Administration. The goal was to track and map nighttime illumination around the planet from 2012 to 2016—a job was a lot more complicated than simply staring at the ground and noting which square miles are lit at night and which are dark.

For one thing, cloud cover meant some parts of the planet could be seen only intermittently. For another, transient, unintended light—such as wildfires in the Western U.S. and especially in Australia during the four-year observation period—could throw off the results, with some areas appearing as if they had actually gotten darker over time, but only because the blazes had at last been extinguished. Then too there is scattered light. One of the reasons light pollution makes stargazing difficult even miles from a city is that the atmosphere acts as a sort of deflector and distributor of urban lighting, faintly illuminating the otherwise dark countryside.

A lot of the researchers’ work thus involved teasing this misleading data out of their overall findings. When they finally did, and analyzed what they had left, they came up with some revealing numbers: Over the course of the survey period, the Earth’s artificially illuminated area had grown by 2.2% per year, a rate that does not appear to be slowing. The share of that lit land that is constantly illuminated—with the nighttime lights never going off as they do, say, in shopping or dining districts, where businesses shut down only late at night—also increased 2.2% per year. Overall radiance, or the brightness of all of the lighting combined, grew by 1.8 % annually.

Some comparatively small but brilliantly lit areas make disproportionate contributions to the nighttime radiance. A single international airport, for example, can be 30 times brighter than an entire town in the American west. And rich countries, no surprise, are bigger contributors to light pollution than poorer countries. A growth in a region’s gross domestic product of 13% over the course of the observation period was reflected in a nearly matching 15% increase in nighttime lighting. The researchers broke that finding down further, showing that levels of artificial lighting increase steadily as per capita income in a given region rises from the equivalent of $2,000 or less, to $6,000, then to $17,000, and finally to greater than $17,000.

None of that need be bad news. The same satellite images that reveal how much of the Earth is lit at night also show that the large majority of the surface is still dark, meaning that you probably don’t have to travel far to escape the glare. What’s more, brighter cities and towns are safer cities and towns, and if light means wealth, it’s hard to complain when both are on the rise.

But nature is paying a price. One 2017 study found that artificial lighting near waterways draws insects up from the water surface and toward the lighting source, disrupting food chains and weakening the local ecosystem. Another study this year found an equally direct cause and effect between increased lighting over beach areas and a dramatic decline in sea turtle populations, as hatchlings are lured away from the water and toward the light, where they are snapped up by predators. Migrating birds, which navigate partly by light from the moon and the stars, can be thrown off course when light pollution washes out the sky. Vegetation is affected, too. A 2016 study showed that trees are increasingly blooming out of season, as lighting coaxes their buds to burst too soon, leaving them vulnerable to damage by cold temperatures before the true onset of spring. That could affect fruit orchards and crops as well.

Finally, of course, there is the effect on us. The American Medical Association warns that nighttime lighting, especially the blue-white LED variety, “is associated with reduced sleep times, dissatisfaction with sleep quality, excessive sleepiness, impaired daytime functioning and obesity.” Alarmingly, a Harvard study showed that artificial lighting may actually be linked to increased breast cancer rates, probably as a result of decreased levels of the hormone melatonin, which influences circadian rhythms. For now, that connection has been found only in premenopausal women who are current or former smokers, but the link is troubling nonetheless.

Certainly, no one wants to turn the world’s lights off. Humans left the state of nature for a reason, and there is little percentage in going back. But allowing more space for nature—and for the darkness and quiet that blankets it at night—could make the entire planet a healthier place. 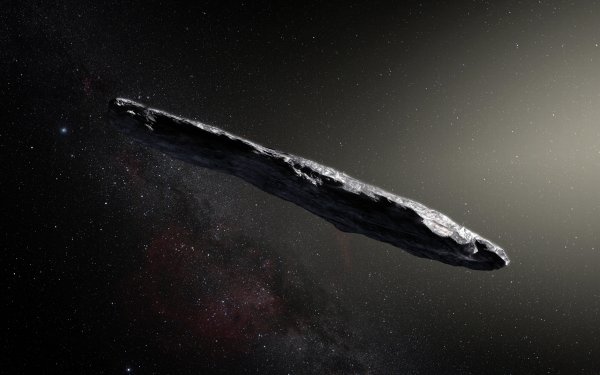 A Mysterious Object Flying Past the Sun Is Our First Confirmed Visitor From Another Solar System
Next Up: Editor's Pick