Before he left for Asia, President Trump said his Administration would be working to pass a tax reform bill.

But while White House staffers have been working with Congress, the president himself has taken a number of steps that have only made it much more difficult to pass, from feuding with a Republican senator on Twitter to throwing out controversial ideas that could complicate negotiations.

The president’s unhelpfulness has appeared — as it often does — on Twitter. Last week, he took to the platform to ask Republicans to use tax reform to repeal the individual mandate that acts as the linchpin of the Affordable Care Act. Such a move would complicate efforts to win over the Republicans who voted against repealing the health care legislation over the summer.

Trump surrogates later clarified that Trump would be willing to drop the demand to repeal the mandate to pass the bill, but not before setting off speculation about whether his message was a suggestion or a demand.

Read More: How Would the Senate Tax Bill Affect You? Find Out With This Simple Calculator

Trump also took to Twitter to insult Arizona Republican Senator Jeff Flake, a potential swing vote on tax reform, as “Flake(y).” Trump said Flake, who has been vocal in his opposition to Trump’s brand of Republicanism since announcing last month that he would not seek reelection, will “be a NO on tax cuts because his political career anyway is ‘toast.'”

Republican Congressional aides acknowledge that Trump’s free-wheeling approach has not helped the bill’s chances, but they point to outreach from other senior officials in the Administration as constructive. Even as other issues occupied Trump’s attention chief White House economic adviser Gary Cohn and Treasury Secretary Steven Mnuchin have spent months meeting with Senate and House Republicans to convey a White House position on tax policy. Cohn, a former investment banker, in particular has won over Congressional Republicans who appreciate his knowledge of economic policy and his direct approach.

“From the Administration’s perspective, the people doing the heavy lifting come from [the National Economic Council] and Treasury,” says a GOP congressional aide. “These are seasoned professionals leading.”

But challenges remain despite the insistence that Congressional Republicans have been collaborating with their colleagues on the other end of Pennsylvania Avenue. Cohn has been viewed as embattled since he criticized the president this summer for his controversial remarks on violence Charlottesville. Mnuchin meanwhile has less knowledge of the legislative process and has suffered from a series of public relations hiccups, including, most recently, viral photos of he and his wife posing with newly minted money perceived as out of touch.

Pressed on what Trump aides brought to discussions with Republicans in Congress, a GOP aide on the Hill responded that they have “knowledge about how a bill becomes a law.” Meantime, Trump continues to claim that Democrats could be key to passing tax reform, but he and his aides have made little effort to attract votes from across the aisle.

“Their version of bipartisanship has been to slap down a version of the bill and say we want Democratic support,” says a Senate Democratic aide. “It was never real.”

“Seems like something they should be running to cast their vote for,” she said at the daily briefing. 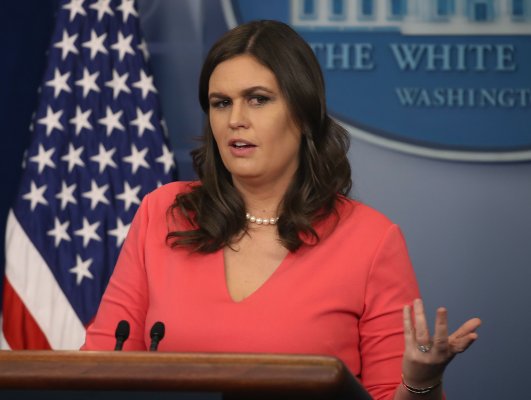 White House Says Trump Doesn't Really Think He Should Have Left the UCLA Players in Jail
Next Up: Editor's Pick