Introducing Drumstick and Wishbone, the two poultry pals up for consideration for the annual White House turkey pardon. Since getting sent to Washington, D.C. for the occasion, the feathered friends have been receiving seriously luxe treatment, including a stay at the Willard InterContinental Hotel.

(This is also tradition. Under President Barack Obama, last year’s birds — Tater and Tot — also got the four-star accommodation at the InterContinental.)

On Monday, the official White House Twitter account also shared pertinent details about the duo. They were both born in June. Wishbone is 36 pounds, while Drumstick clocks in at a meaty 47. And they apparently have varying tastes in music, with preferences for country (Wishbone) and classic rock (Journey).

Tradition dictates that one turkey receives the photo opp at the Rose Garden and an official pardon from the president. However, both birds will be saved from the dinner table.

That said, the White House has asked the internet for opinion on which of the turkey should be pardoned by President Donald Trump. The poll results are nearly neck-and-neck — as of Monday afternoon. Drumstick had a slim lead at 52%.

After the pardon, both will be sent to Virginia Tech’s “Gobbler’s Rest” exhibit, where visitors can check out previous recipients of the honor enjoying their retirement in peace and off the table. This is the 70th year running that the National Turkey Federation has sent the president turkeys, but the tradition of sparing a turkey’s life was started by President George H.W. Bush 25 years ago. 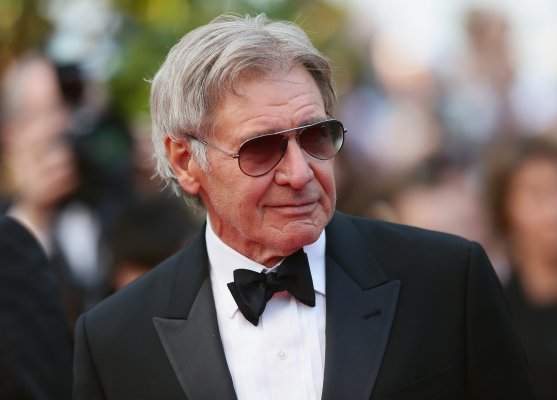 Harrison Ford Went Into Action Hero Mode to Rescue a Woman After a Highway Crash
Next Up: Editor's Pick