The first modern Royal Wedding to captivate the world — decades before William and Kate’s — took place 70 years ago this Monday, when Queen Elizabeth and Prince Philip were married with unprecedented fanfare in Westminster Abbey.

Back then they were then still Princess Elizabeth and Lieutenant Philip Mountbatten, but the wedding of the King of England’s elder daughter was unlike any that people had experienced before — in part because it was the first of its kind to be broadcast live. Two hundred million people around the world listened to the proceedings from their homes, while half a million more took to the streets in London to catch a glimpse of the procession. And the wedding itself had 2,000 guests, over ten of whom were themselves kings and queens.

Though the wedding wasn’t the first influential royal ceremony, the event took that influence into the 20th century, as shown by the clip above, from the PeopleTV special Elizabeth and Philip: A Royal Romance–The Real Life Story Behind ‘The Crown,’ premiering Friday. And as viewers of the Netflix series The Crown already know, that effect wasn’t limited to the wedding itself.

TIME recounted the day’s events at the time in its Dec. 1, 1947 issue, noting that the wedding “carried over six continents and seven seas a brightness so simple it was hard to understand.” It noted that only those positioned closest to Elizabeth in the church could hear her vow “to love, to cherish, and to obey” her husband—but the answer came through clearly to everyone listening over BBC Radio.

The future Queen caused a touch of controversy by including the promise “to obey” Philip, as many thought the future monarch should not be obliged to anybody, even her husband. But Elizabeth chose to communicate her devotion to her spouse and her comfort with the traditional duties as a wife by pledging herself to him as other wives would in their marriage promises.

The radio broadcast couldn’t capture all the details of the wedding and the adjacent festivities as television broadcasting would today. (The TIME article notes how King George VI helped others with his daughter’s dress train when it got caught on the marriage steps, for example.) Even so, it made a difference. TIME notably concluded that the millions of listeners would remember “most of all, the sureness and reality of God Save the Queen when, at the end of the trumpets, the Abbey organ and chorus hidden in the high arches sang the ancient and truest truth of England.” For a world that had merely heard descriptions or read about royal weddings in newspapers before, the live broadcast brought the event to life in a way that made this the first truly modern royal marriage spectacle. 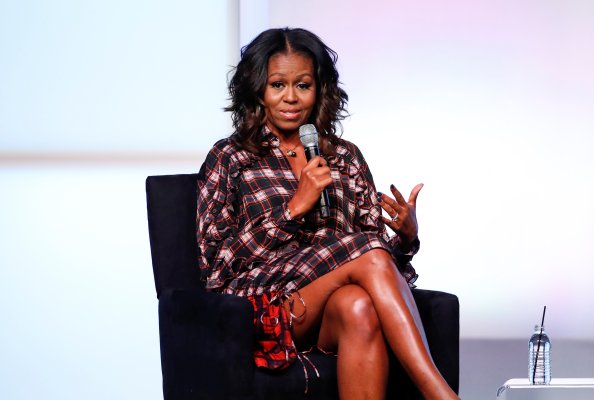 Michelle Obama Urges Youths to 'Think Before You Tweet'
Next Up: Editor's Pick