Sharon Tate's Sister on Learning of Charles Manson's Death: 'I Said a Prayer, Shed a Tear'

Debra Tate, whose pregnant sister Sharon Tate was murdered at Charles Manson’s orders in 1969, said she learned about Manson’s death about 15 minutes after it happened.

Tate told the New York Daily News that she cried after receiving the phone call at about 8:30 p.m. on Sunday night. The cult leader was 83 when he died while serving a life sentence for murder and conspiracy, after his death penalty sentencing was commuted when a California court struck down the penalty in 1972.

“I said a prayer, shed a tear, stuck a flower under my cross in my bedroom and emailed Roman [Polanski],” Tate told the Daily News, referring to the director who was Sharon Tate’s husband at the time of her death.

Manson had his followers stab Sharon Tate and four others to death at her and Polanski’s home in Los Angeles. Sharon Tate had been scheduled to give birth within two weeks of her death.

In the nearly 50 years since Sharon Tate’s murder, her sister says she’s been able to come to terms with his imprisonment.

“I’ve processed through all of my hate for him. Hate isn’t health. It won’t bring my sister back,” Tate told the Daily News. “One could say I’ve forgiven him, but there’s a difference between forgiving and forgetting.” 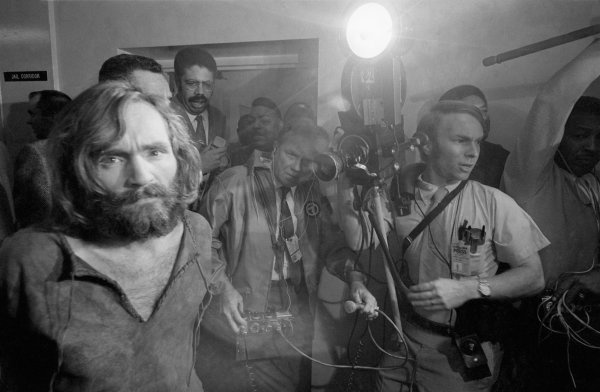 'The Demon of Death Valley': Read TIME's Original Report on the 1969 Manson Family Arrests
Next Up: Editor's Pick