The new Museum of the Bible three blocks from the Capitol has a political ambition. The Bible, says the museum’s chairman and the president of Hobby Lobby, Steve Green, needs to have a prominent voice in Washington.

“We think Congress ought to know the foundation of the nation that they are running today,” Green told TIME in an interview Tuesday afternoon.

“We would hope the White House, whether it is the current president, former presidents, future presidents, we would invite all people to come and know about this book,” he said.

Green said that the museum hopes to engage “all people” with the Bible, and that Washington was chosen because of its volume of tourists and concentration of museums. The museum’s leadership has repeatedly stated that the project is nonsectarian and does not espouse a faith perspective. The evangelical Green family has largely funded the $500 million museum, and its board is comprised of mostly white evangelical men. It opens to the public on Nov. 18.

“While we say it is for all people, that includes our legislators,” Green said. “Many of the principles our nation was built on came from the Bible and we think that it is important for them to know that.”

Asked what it was specifically that he wanted legislators to learn, Green said, “Our religious freedoms, and many of the principles our nation was built on, came from the Bible.”

Asked what he hoped the White House would learn, Green said, “Hopefully the teachings of this book — which are to treat others as you would want to be treated, dealing with honesty, integrity, to love God and to love others as you would love yourself, these kinds of lessons that the Bible teaches — we would hope would be embraced by all people.”

The museum has invited President Trump to come visit.

“We heard that there was an interest from the family to come and view it, so we sent an invitation,” Green says. “I don’t know how well he is versed on the Bible and how much he has used it, but I think that obviously if it was of an influence, it would be good.”

Green says the museum has also discussed having an event for all living presidents to take a tour.

The museum held its opening gala at the Trump International Hotel in Washington on Thursday night. Trump’s son Eric and his wife Lara promoted the event on Twitter.

During the 2016 election, David Green, Steve’s father and Hobby Lobby’s founder and CEO, supported Florida Sen. Marco Rubio in the primaries and later said he only supported Trump because there was not a better option. Steve Green said on Tuesday that his support for Trump is mixed. “There are things that I have supported that he has done, and there’s things that I don’t agree with that he has done,” Green said.

Green said he likes that Trump “has been stronger for religious freedom.” He declined to say what Trump has done that he does not like, saying that he doesn’t “follow politics enough.”

Roy Moore, the former Alabama state judge running for U.S. Senate who has been accused of sexual misconduct against teenage women, has made the Bible central to his political platform. Green told TIME that Moore should step aside only if the allegations against him are true. “We are all imperfect, which is what the Bible teaches us,” Green said. “So we all have flaws, but there are ways we address those flaws.”

Green has long argued he wants the visitor to decide if the museum is fair and does not push a particular perspective on the text, theologically or politically. But he also acknowledged that not all roles that the Bible could play in politics have a moral equivalence. “The Bible has always been used inappropriately, and in some cases appropriately,” Green said. “There have been men that have used this book for their own selfish ill intent. I would argue that we shouldn’t blame the Bible for man’s misuse of it.”

“Our nation is built on a worldview,” he said. “Our founders built that on concepts they found in the Bible, and it has worked out real well.” 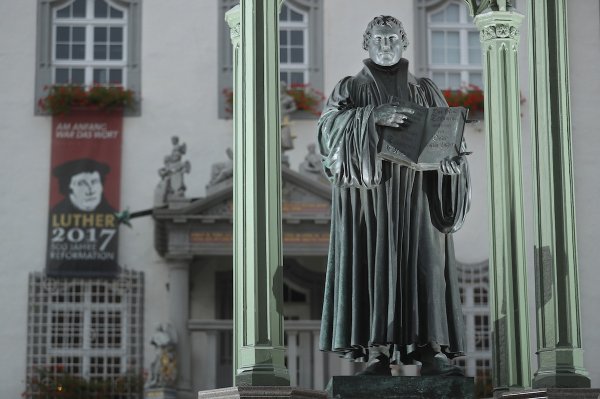 Martin Luther's 95 Theses Are 500 Years Old. Here's Why They're Still Causing Controversy
Next Up: Editor's Pick