Social media was awash Thursday with images of elephants. One widely circulated photograph depicted the president’s son, Donald Trump Jr., posing in hunting regalia, holding up a disembodied tail that appears to have been cut from a felled elephant beside him.

Reports surfaced this week that the administration of President Donald Trump would reverse an Obama-era ban on importing legally hunted elephant remains — known as trophies — from Zimbabwe and Zambia. While Twitter users expressed outrage, the U.S. Fish and Wildlife Service (FWS), a federal agency under the Department of the Interior, said in a statement that the ban’s reversal could actually “enhance the survival of the species in the wild.”

The backlash from skeptics was thick and fast. On her Thursday talk show, Ellen DeGeneres announced that she was launching a funding drive for elephants, which she said show “compassion, sympathy, social intelligence, self-awareness… all the things I have yet to see in this president.” British comedian Ricky Gervais called the move a “devastating blow to the survival” of elephants, and characterized it as “savage and pointless.” And the Leonardo DiCaprio Foundation, which has distributed $80 million in conservation grants, called the ban reversal a “reprehensible” move that would cause the U.S. to lose its “global leadership position in putting an end to the ivory trade.”

Why is the administration lifting the ban?

Elephants are listed as threatened under the Endangered Species Act, but a stipulation in the act allows the U.S government to issue permits to import trophies if there’s evidence that the “hunting actually benefits conservation for that species.” That’s what the U.S. FWS says will happen in Zimbabwe and Zambia. The Service said it had determined that “legal, well-regulated sport hunting as part of a sound management program can benefit the conservation of certain species by providing incentives to local communities to conserve the species and by putting much-needed revenue back into conservation.”

The FWS announcement is dated November 16. However a November 14-dated statement on the website of the hunting advocacy group Safari Club International (SCI) says an FWS official announced the rule change at a forum it co-hosted in Tanzania. Along with the National Rifle Association (NRA), the SCI had opposed the initial 2014 ban. Tanzania, which is in the midst of a poaching epidemic, is also under consideration for an FWS ban lift, the Washington Post reports.

How did the ban originally come about?

The ban on bringing hunting trophies into the U.S. was never applied across the board. Remains of animals legally hunted in South Africa and Namibia could be bought in under the Obama administration but those from Zimbabwe and Zambia were eventually prohibited. That’s because the FWS in 2015 determined that Zimbabwe could not adequately prove it could implement laws to protect elephants.

Citing people briefed on the rule change, the Post reports that the decision was made after Zimbabwe officials submitted documents that fulfilled the FWS’ previously unmet reporting requirements.

What do conservationists say?

That hunting can, under the right circumstances, complement conservation efforts is not under dispute. But even the FWS statement announcing the rule change warns that to support conservation efforts, “hunters should choose to hunt only in countries that have strong governance, sound management practices, and healthy wildlife populations.”

Zimbabwe, conservationists say, is no such country. Wayne Pacelle, president and chief executive of the Humane Society, wrote in a blog post: “It’s a venal and nefarious pay-to-slay arrangement that Zimbabwe has set up with the trophy hunting industry.” He also described it as “one of the most corrupt countries on Earth.” Zimbabwe is also in the midst of a turbulent political transition that appears to be a military coup; on Tuesday night, the armed forces took control of the country’s capital, Harare, and have since kept President Robert Mugabe and his wife in custody.

Others worry that lifting the ban will undermine efforts to suppress the illegal poaching that feeds the ivory trade. Iain Douglas-Hamilton, founder and senior scientist at the Nairobi-based Save the Elephants says that while Africans are told “don’t kill elephants,” wealthy Americans “are being allowed to come and do it,” according to the Post. “When you go back in history, it did do good, but now is absolutely not the time to be opening up hunting,” Douglas-Hamilton said. 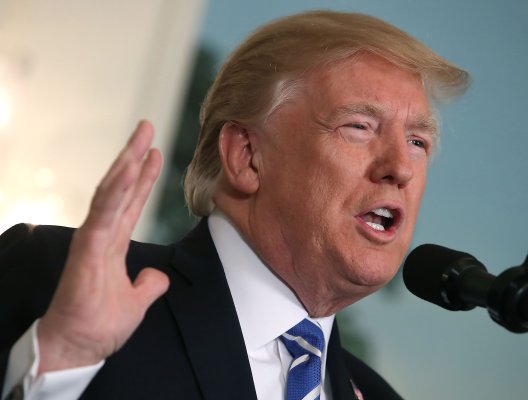 The Internet Is Outraged Over Trump's Al Franken Tweets
Next Up: Editor's Pick