A humanitarian crisis is rapidly deepening in Yemen, where millions of aid-reliant people have been cut off from assistance since Saudi Arabia closed the country’s ports on Nov. 5. Riyadh eased the blockade slightly following international outrage, but humanitarian officials say it’s not enough. Three UN agencies warned Thursday that “the lives of millions” were at risk if aid is not immediately let in. According to Save the Children, 130 children are dying every day.

“Together, we issue another urgent appeal for the coalition to permit entry of lifesaving supplies to Yemen in response to what is now the worst humanitarian crisis in the world,” reads a joint statement from the heads of the World Food Program, Unicef and the World Health Organization. “The supplies, which include medicines, vaccines and food, are essential to staving off disease and starvation. Without them, untold thousands of innocent victims, among them many children, will die.”

More than 20 million people, including 11 million children, are in urgent need of humanitarian supplies that are currently blocked from entering Yemen. Riyadh froze the border in retaliation to an intercepted ballistic missile near the capital, allegedly fired by the Iranian-backed Houthi rebel group. Saudi Arabia accused Iran, its long-time regional rival, of supplying weapons to group, and sealed all entry via land, air, and sea to stem suspected arms smuggling. Crown Prince Mohammed bin Salman called the launch a “direct military aggression” that could be “considered an act of war.”

The “catastrophic” Saudi blockade prompted international outcry, as 7 million people in war-torn Yemen rely completely on imported food. Saudi Arabia implemented a partial lift of the blockade on Monday, saying it would allow aid to enter government controlled ports of Aden, Mocha and Mukalla. But the World Food Program estimates that another 3.2 million will be driven to famine, and 150,000 malnourished children are at risk of dying in the coming months.

Yemen has been gripped by civil war since a failed political transition in 2015, and its coalition government is backed by Saudi Arabia. The Houthi are backed by Iran, though Tehran has denied providing them with weapons. Since the start of the war, more than 10,000 people may have been killed, according to the Associated Press. Nearly 50,000 have reportedly been injured throughout the conflict.

Violence, famine, and the denial of humanitarian aid also threatens to exacerbate the fastest-growing cholera epidemic ever recorded, affecting nearly 900,000 people, according to UN figures. While numbers of new cases have declined for eight consecutive weeks, the UN warned that if the embargo is not lifted, “cholera will flare up once again.”

“The clock is ticking and stocks of medical, food and other humanitarian supplies are already running low,” the UN joint statement read. “The cost of this blockade is being measured in the number of lives that are lost.” 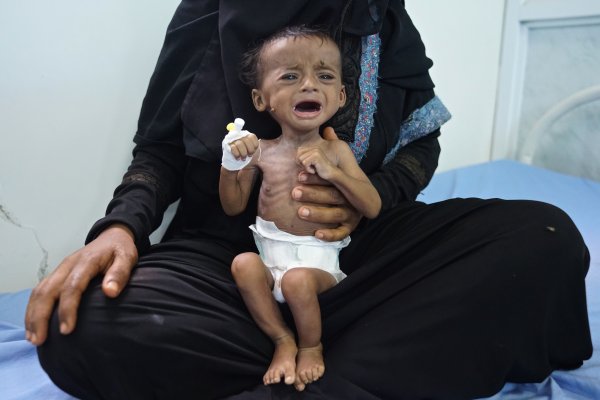 Saudi Blockade on Yemen Could Starve Millions
Next Up: Editor's Pick