For pop star Tove Lo, Sweden’s gritty party queen, pop is personal. On her new album Blue Lips, the casually cool 30-year-old singer-songwriter continues to find poetry in frank desire Conversant in feminism, sex-positive and drug-friendly, the 30-year-old producer has been a force in pop since the early ’10s, when she worked with hitmaker Max Martin and wrote songs for the likes of Icona Pop and Ellie Goulding. But it was 2014’s gritty, unglamorous sleeper hit “Habits (Stay High”) that tapped a nerve and launched her independent career. Since then, she’s used brutal autobiographical honesty and unrelentingly catchy production to describe the pleasures we seek when we’re looking to numb pain. She followed debut album Queen of the Clouds with last year’s Lady Wood, a wink to her unabashed sexuality, toured the world alongside superstars like Coldplay, performed at Coachella and released two provocative short films. Blue Lips is the sequel, at turns ecstatic and spare, exploring the highs and lows of love.

“I’m always chasing the adventure and the passion with someone, an all-consuming thing,” she explains to TIME. That comes through in her sexually explicit lyrics.

After she shared plans to add to her collection of tattoos in honor of Blue Lips, TIME spoke to Tove Lo about pop feminism, the restlessness that comes with success and the story behind her latest dance floor hit.

TIME: Tell me a little bit about the two “chapters” on Blue Lips, which you call “Light Beams” and “Pitch Black.” What do they mean to you?

Tove Lo: It’s the final stages of this emotional journey that the whole album has been. “Light Beams” is about a very naive, consequence-free, reckless way of life, but in a happy spirit. Not to numb anything or try to escape anything, but enjoying the lack of responsibility. And “Pitch Black” is more about the post-rush come-down, heartbreak. It’s more vulnerable, not only embracing my flaws, but admitting to them — admitting that some things need to change.

And why the name Blue Lips?

It’s a play off “blue balls” and a play off Lady Wood, too. And in a deeper sense, it’s about never feeling satisfied. I don’t mean sexually; I mean just in life in general. When you grow up having anything that you need — because I did, I had loving parents, I had everything — you’re chasing something else. It’s always about more, the next step. Unless it’s growing, it’s not successful; to sustain something almost equals failure. I try not to think that way, but I feel I’m always chasing something.

Now that you’ve had a huge year of performing with and working with some of pop’s biggest names, where do you go from here?

That’s the thing. Now what? I’m excited I have a platform from which I can express myself exactly the way I want to. In the beginning, the obvious goal was to have the most success as possible, so people try to push you in a direction that might not upset any people; you try to be a more commercial. But I love that I’ve fought against that and stayed true to me.

Since the beginning, you’ve been vocal about sexuality, partying and the like. Have you ever received pushback from the industry or your family about that?

My parents, the first time they saw the “Habits” video, they were like, “Oh my god, what is she doing?” But when they saw things started happening, they were like, “We know nothing.” They’ve been worried, but supportive. The sexual expressions I think they’re honestly proud of. People question it because — it’s just being a woman, you end up having to defend yourself if you choose to sing about things that aren’t seen as a good example. But it doesn’t really matter to me if people don’t agree with it.

We were at Coachella, and I had just performed; it was one of the first festivals I went to outside of Europe and it was so different — beautiful desert, and everything is clean and dry, everyone’s walking around the palm trees with flower crowns. I was wearing this see-through top that looked like a disco ball exploded all over my boobs. I got offstage, and my boyfriend, he just turns around and goes, “Hey disco t-ts, let’s go.” And I was like, “Wow, that’s me.”

Back in 2014 with “Habits,” you were one of the first to explore these subjects. Now it feels like there’s a whole wave of sexual empowerment in pop.

Yeah! Which is great. I remember the tone from when I released Queen of the Clouds to when I released Lady Wood was completely different. It went from, “Do you really have to? People aren’t going to take you seriously” to like “Feminism! F–k yeah! Happy to be part of it!” It’s a great change to see in such a short time. Then you have to remember that it’s a huge world, and we’re in a very small bubble of it. 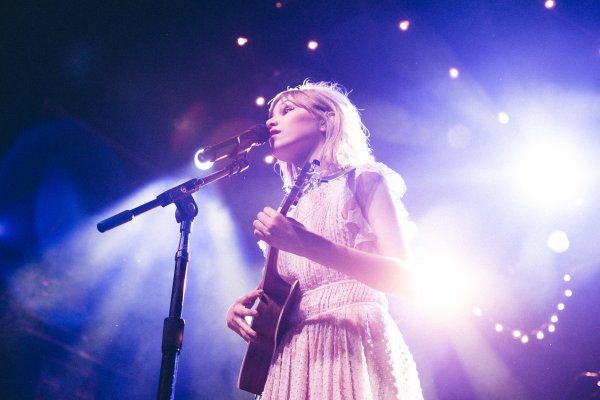 Getting to Know Pop's Youngest Rising Star, Grace VanderWaal
Next Up: Editor's Pick