Twitter Is Full of Fake History Photos. Here's How to Outsmart Them

British actor Michael Caine with Natalie Wood in 1966, in one of the many photos that have made the rounds online.
Bill Ray—The LIFE Picture Collection/Getty Images
By Alexis Coe

The Twitter war between historians and history-photo accounts has been going on for years — but now, as it becomes clearer than ever that inaccurate information floating around on Twitter can affect the course of world events, the battle has taken on new importance.

As Rebecca Onion ably explained for Slate back in 2014, accounts such as @HistoryinPics, @HistoricalPics, @HistoryInPix and dozens of others produce inaccurate or fake content, and fail to properly attribute the artist or institution from which it was lifted — often to the point of absurdity.

A few days ago, @historylvrsclub posted what it identified as “a genuine conversation between Tony Blair and Bill Clinton.” No year, no source, no context offered, likely because whomever is behind the account didn’t bother to look it up — or even read the content of the post itself, which is obviously a parody. If @historylvrsclub had taken just a moment to google any line from the “bogus transcript,”it would have quickly figured out the progenitor was comedian Michael Spicer.

But @historylvrsclub doesn’t feel beholden to its roughly 195,000 followers, more than 35,000 of whom retweeted that “genuine conversation,” ensuring the misinformation rapidly spreads.

Historians have long called for a mass unfollowing of these viral feeds, which mostly trade in JFK, World War II and nameless skimpily dressed girls. We’ve tried to engage the accounts directly, but they usually respond to us even less than to their hundreds of thousands of followers who often ask for more information, which is to say not at all. (“Most improved” may go to the account @WhoresofYore, which I sent a Direct Message some time ago and has gotten better, though inconsistently, on context and attribution.) Followers are there to receive whatever the nameless, faceless account manager — often using that familiar Abraham Lincoln daguerreotype as an avatar — has queued up, an image likely borrowed from another unreliable account, or from Reddit threads that exist specifically because the images have already been deemed fake.

You don’t need a graduate degree or even to be particularly skilled at Internet searching to figure out the riveting, true stories behind these images, and that’s often what needles me the most. The person or people behind @historylvrsclub are so indifferent to the material that the tweets are lifeless—even when the image is beguiling. (When contacted via Twitter about this article, @historylvrsclub responded that I should go ahead and talk about the account however I liked, as “we live in a free world.”)

First, let’s cover what’s vague to inaccurate. A quick reverse Google image search shows the photo appears in a variety of short, serviceable articles. The @historylvrsclub account dates it to the 1940s, so why didn’t the account just put type “1949?” It would’ve saved characters for a more provocative caption, if nothing else. And attribution wouldn’t cost @historylvrsclub anyththing, either: the photo is courtesy of the Roosevelt hotel, which can be tagged by its handle @TheRoosevelt_NO.

I spent under a minute on nola.com before realizing the original caption wasn’t just lazy: it was misleading. In the very first paragraph, I learned that the man behind the bar was Seymour Weiss, the hotel’s “legendary manager” who, upon purchasing the bar in 1949, did away with the previous owners policy of “men only” with a publicity stunt. He invited women—or rather, “make-up” girls who he recruited from Godchaux’s department store — in a move I would call savvy, not “brave.” He even called it the “Storming of the Sazerac,” which, at the very least, @historylvrsclub should have included. This identification isn’t just accurate; it’s fun. Here’s my version:

I assigned myself another rewrite, this time with a two-minute time limit from research to post. I picked the first tweet I saw, featuring a couple with the caption, “Michael Caine & Natalie Wood.” No date or source or context is offered. Is this a film still? Was this a fashion or publicity shoot? Were they an item? @historylvrsclub doesn’t offer that information or deign to answer the many followers who ask for it.

If I’d had an extra minute, I would have found out the dog’s name. Promise.

I could go on, but what’s the point? @historylvrsclub and its ilk don’t deserve any more of our attention, but these ten accounts do. I hope you’ll follow them instead.

Alexis Coe is a historian and author of Alice+Freda Forever and the forthcoming George Washington biography, You Never Forget Your First. Follow her. 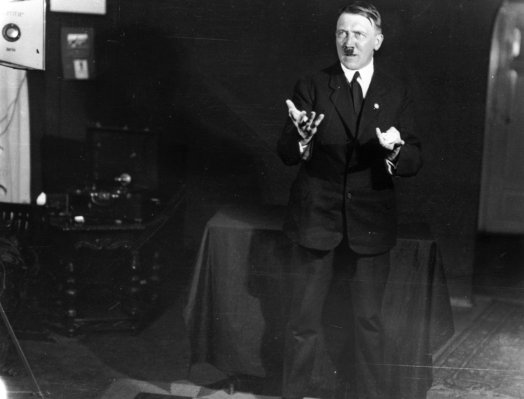 Historians Still Have a Lot to Learn About Adolf Hitler. Here’s Why
Next Up: Editor's Pick