At least four Republican senators are talking privately about opposing the current version of the tax reform bill, which the House voted to pass early Thursday, on the grounds that it would balloon the national deficit too much.

Arizona Sen. Jeff Flake and Oklahoma Sen. James Lankford are among the four — enough to stop a bill that can only spare two Republican defections — who have concerns about a tax reform bill that was estimated to hike the deficit by $1.5 trillion over 10 years. The other two senators have not publicly confirmed their concerns.

In an interview with TIME on Tuesday, two days before the House voted to pass its version of the tax reform bill, Flake said that he believes the bill is larded with temporary gimmicks that will ultimately add even more than that to the deficit.

“I’ve been concerned for a long time on our debt and deficit — that’s what animates me,” Flake told TIME. “There are a couple other people who are concerned as well. We can do tax reform in ways that will grow the economy but we can’t just ignore the debt and deficit.”

Their concerns show the tricky needle that Republicans will have to thread to get the tax reform bill through the upper chamber using reconciliation, a parliamentary procedure that allows them to avoid a Democratic filibuster but imposes restrictions on how the bill is written.

On Wednesday, the Wall Street Journal reported that Sen. Ron Johnson of Wisconsin would be voting against it, saying it unduly favors corporations over small businesses. Maine Sen. Susan Collins has also raised concerns about a provision in the bill to repeal the Affordable Care Act’s individual insurance mandate.

But the deficit hawks’ criticisms could be the hardest to address, since the Republican leaders are already struggling to find ways to pay for tax cuts in the bill.

Flake pointed in particular to the provision known as “full expensing” that allows companies to write off their assets when paying taxes, costing the government potential tax revenue. The tax reform plan is set to sunset the provision after five years — but the Arizona Republican isn’t convinced.

In addition, the tax reform bill slashes the corporate tax rate from 35% to 20%, curtails the state and local tax (SALT) deduction, and, under the Senate plan, does away with the Affordable Care Act’s individual mandate. Though Republicans have touted the tax reform bill as a boon for the middle class, new numbers from Congress’ Joint Committee on Taxation show that taxes for those earning under $75,000 a year would increase by 2027.

Despite the bill’s troubles in the Senate, you can’t fault House Republicans for feeling festive about the bill’s passing. For the first time in a decade, Republicans control both houses of Congress and the White House — and yet they have failed so far to achieve any meaningful legislative victories; their losses, meanwhile, namely two unsuccessful attempts to repeal Obamacare, have been painful and public. Achieving tax reform would amount to a triumph that could stabilize the rocky G.O.P. ahead of the 2018 midterm elections next November.

It is also important to President Donald Trump, who is hungry for a win. Trump traveled to Capitol Hill on Thursday morning ahead of the House vote to encourage Republican lawmakers to vote for the package.

“He had confidence that the Senate would be able to reach an agreement,” said someone who was in the room during the meeting. “There was a lot of laughter — the President was in a very jovial mood.”

A number of Senate Republicans agree with him — that the points of tension can be ironed out efficiently.

“I think we can address those concerns,” Sen. Lindsey Graham of South Carolina said. “And the deficit impact? Cutting taxes is not going to add the deficit in any appreciable way. You’re never going to convince me for deficit reasons not to cut taxes. If there’s a gimmick, fix the gimmick.”

The Senate hopes to have a tax reform bill on the floor after Thanksgiving; Trump has made it clear that he wants to sign a piece of legislation into law by Christmas. The growing concern in the Senate suggests this might be complicated — something hoped for by the 13 House Republicans who trudged away from the chamber floor after casting their ballots against the bill on Thursday.

“If this is going to add $1.5 trillion to the deficit over the next ten years, it’s not fair to our children and grandchildren,” Rep. Walter Jones of North Carolina told TIME outside the House chamber after the end of the vote. “If this was a Democratic bill we wouldn’t even be voting for it. That’s how hypocritical this place has become.” 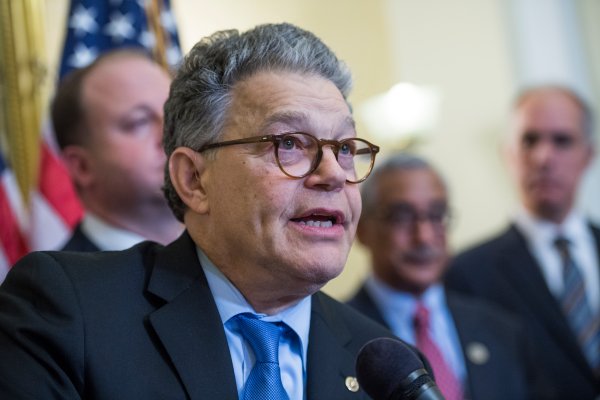 Al Franken Groping Allegations Could Change How Congress Deals With Sexual Misconduct
Next Up: Editor's Pick