Can Singing in the Shower Fight Climate Change? One Major City Thinks So

According to the city of Cape Town, two minutes can make the difference between a viable city and a future straight out of the Mad Max movies, where armed soldiers dole out daily water rations from municipal water taps—at least in the worst case scenario.

The tourism capital of South Africa is going through one of the worst droughts in recorded history. The city is fast approaching Day Zero, when local dams dry up and the city runs out of water. At current consumption levels, that’s projected to take place sometime in the middle of next year. So city leadership is asking residents and visitors to radically cut down on water use, lest they be forced to take water saving measures up a notch by shutting down the pipe network and cueing the dystopian scenario of centralized water distribution points.

That means no more watering the garden, no more topping up the pool (or closing it off entirely), flushing the toilet no more than once a day, and limiting showers to less than two minutes long.

Reasoning that no one bathes with a watch, but that everyone likes to sing in the shower, Cape Town, in conjunction with local financial services giant Sanlam, has come up with a fun way to save water: the two-minute shower song. What better way to count down the seconds than by rapping along with your favorite hip-hop star on a precisely timed, totally remixed version of her most popular release?

“If I can rap this song in under two minutes, then we can definitely shower in under two minutes,” says South African hip-hop star Rouge, whose blisteringly fast Déjà Vu is one of the best tracks in the compilation. The songs range from old school rap (Youngsta’s Wes Kaap) to pop (Taking it Easy, by Goodluck) funk (Micasa’s Nana) and punk (Francois van Coke’s – Dit Raak Beter). Jimmy Nevis will have you singing into the mic of your detachable showerhead (the water is turned off while you soap down, natch) with Day Dream, while Desmond and the Tutus’ Teenagers will have you dancing in the stall.

For those short on time, not just on water, it’s also a great introduction to South Africa’s contemporary music scene. 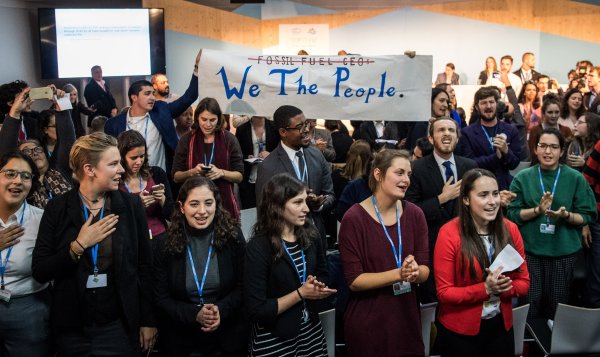 The Trump Administration Pitched Coal at a Climate Change Conference
Next Up: Editor's Pick