How Marie Kondo’s Expectations of Tidiness Have Changed After Kids

Ideas
By Lucy Feldman
Feldman is a Senior Editor for TIME.

Marie Kondo, hailed the world over as one of the foremost experts on decluttering, is now a mom. The Life-Changing Magic of Tidying Up author has two daughters, Satsuki, 2, and Miko, 1 — neither of whom was around when she wrote the book on keeping your home clean. With motherhood comes some new considerations.

Kondo spoke with TIME about how becoming a parent has changed her perspective on her KonMari method, how she’s raising her daughters to be tidy — and how she’ll cope if they refuse to cooperate.

Have you noticed a difference in how boys and girls tidy?

I haven’t noticed too much of a difference. There are girls who might decide to organize or they might be playing and running around — and I’ve found the same thing for boys, as well. The real difference is the parents — whether the kids have been watching their parents be organized and tidy, that makes a big difference.

How have you demonstrated tidying to your daughters?

I try to show my older daughter the things I do daily. I try to do some of the washing and folding in front of her, deliberately. Sometimes my daughter starts folding hats or tries to fold placemats on the dining table.

What if they grow up and say they don’t want to tidy, they’d rather be messy?

I do think about the day that might actually happen. But one thing that’s important for me is to figure out what people’s personal spaces are. I might say from here to here is your personal space, and if you decide to organize it, that would be great. But if she says she really doesn’t want to organize, I won’t say anything about that. What’s really important is that you yourself can tidy up. If you can keep your personal space tidy, it gives you a calm mindset. Then even if your family is not as tidy, it’s OK.

What’s the hardest thing for kids to learn when it comes to being neat?

Rather than what’s difficult, I think about what’s important for them to know, and that’s what a space looks like when it’s actually tidy. I teach how to fold your clothes. Just by knowing how to fold clothes, it makes it easier to keep things organized.

What has surprised you most about being a parent?

When you’re not tidying, what’s your favorite way to spend time with your kids?

I often sing children’s songs with them. One example is “Ton-Ton-Ton-Ton Higaji-San.” The direct translation would be something like “Clomp-Clomp-Clomp-Clomp Bearded Old Man.” I love to read out loud to my children, something my own mother did for me. My favorite is a Japanese book called Moko-Moko that my daughter really likes. It plays around with onomatopoeia.

This interview, spoken in Japanese and translated into English by an interpreter, has been edited and condensed for clarity. 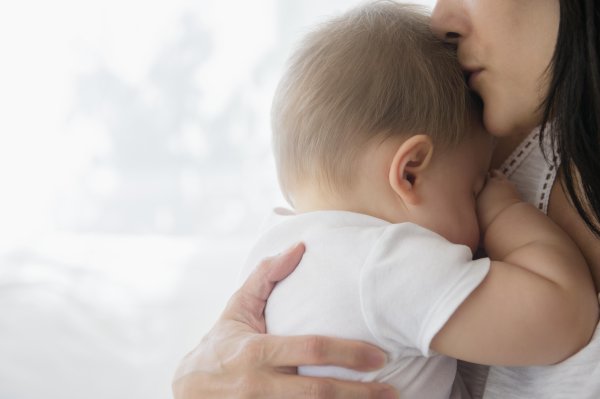 Here's How Mothers Around the World React When Their Babies Cry
Next Up: Editor's Pick