U.S. President Donald Trump, left, and Xi Jinping, China's president, shake hands during a news conference at the Great Hall of the People in Beijing, China, on Thursday, Nov. 9, 2017
Bloomberg—Bloomberg via Getty Images
By Ian Bremmer

“America First” is finally here… and it doesn’t look much different to what came before. But trade is the area we’re seeing the most obvious unwind of American global leadership. Here, a look at the current state of five major trade deals in the era of Trump’s “America First.”

The big Asia deal the U.S. walked away from

One of Trump’s first acts as President was to withdraw the U.S. from the Transpacific Partnership (TPP), a deal which would have governed the trade rules and practices of 12 countries and 40 percent of global GDP.

The deal, negotiated by the preceding Bush and Obama administrations, was intended (in part) to rein in Beijing’s economic ambitions by offering Asian countries a U.S.-led trade framework in which to do business. Then came the 2016 U.S. presidential season. Trump made TPP a focal point of his campaign, arguing that multilateral trade deals place the U.S. at a distinct disadvantage. Democrat Bernie Sanders made the same case, pushing Hillary Clinton to (reluctantly) follow suit.

At last week’s APEC summit, the remaining 11 members agreed to move forward on what they’re calling TPP-11. It will be smaller in scale (just 15 percent of the world economy will now fall under its purview), but the U.S. could one day rejoin if it wants. That’s unlikely under Trump, but it’s possible under his successor.

Of course, the U.S. would be signing on to a worse deal than the one it helped craft, and that’s the point—being in the driver’s seat of mammoth multilateral trade deals means setting the agenda and terms, a level of nuance missing from Trump’s “America First” rhetoric.

The U.S. retreat from TPP has given China an opening. China is a driving force behind a 16-country trade deal called the Regional Comprehensive Economic Partnership (RCEP), under negotiation since 2012, which focuses primarily on countries in Asia and Oceania. Six of those countries—Japan, Australia, New Zealand, Brunei, Malaysia, Singapore and Vietnam—are also part of TPP. All told, RCEP would set the terms of trade for 3.5 billion people and 24 percent of the global economy.

But RCEP seems tailor-made for China. It isn’t a high-standard agreement, mostly ignoring issues like state-owned enterprise and data flows—all problematic areas for China’s state-capitalist model—that made TPP a trade agreement for the 21st century.

China’s support for RCEP fits well with its “One Belt One Road” (OBOR) strategy that aims to extend China’s reach across Asia to the Middle East, Europe, and beyond. While OBOR is focused on the physical infrastructure (think trains, ports, pipelines and highways) needed to transport goods and services, RCEP is the trade framework that will govern much of the transport of those goods and services.

Technically, “America First” hasn’t altered much on the RCEP front. But it has signaled to any countries searching for links to a strong and stable economic superpower that China is the more predictable bet.

The Canada-E.U. deal on the verge of success

Countries in Asia aren’t the only ones with options. On September 21, the Comprehensive Economic and Trade Agreement (CETA) struck between Canada and the E.U. provisionally entered into force, though its full implementation still requires ratification from parliaments of individual E.U. countries.

The deal, which took seven difficult years to negotiate, was crafted to eliminate 98 percent of tariffs between the two parties, inching up to 99 percent over the next seven years. Just as notable is the fact that the deal now allows Canadian firms to bid on European government projects, and vice versa—a testament to the strength of the deal and the aspirations behind it.

CETA stands in sharp contrast to the other trade deal that Canada is busy with — the North American Free Trade Agreement, or NAFTA. Since the deal came into force in 1994, the U.S. has more than tripled its trade with Canada and Mexico; more than 400,000 auto manufacturing jobs have made their way into Mexico, and U.S. and Mexican investments flowing into Canada have more than tripled. As far as free trade stories go, this is one of the better ones. But then NAFTA got caught up in the 2016 campaign season and the rhetorical war Trump was waging on Mexico. NAFTA renegotiations began this past August and are now entering their fifth round.

Press reports suggest the talks are not going well. Negotiating trade deals is a difficult, years-long process under the best of circumstances. And, to no one’s surprise, this is not the best of circumstances. Just 22 percent of Canadians and 5 percent of Mexicans think Trump will “do the right thing regarding world affairs.” The looming U.S. midterm elections (November 2018), Canadian municipal elections (October/November 2018) and Mexico’s presidential election (July 2018) don’t help. All good trade deals require compromise; that becomes much tougher in politically-charged election-year environments.

The bilateral deal between the U.S. and South Korea (that Trump wants to renegotiate)

What’s the alternative to multilateral deals under “America First”? According to Trump, the answer is more bilateral agreements. The U.S. currently has 12 of those, but the one getting the most press in recent months is KORUS, the free trade agreement between the U.S. and South Korea. Back in April, Trump was calling KORUS a “horrible deal” that’s “destroyed” the U.S.

That may sound like a head-scratching assessment, but it makes sense for someone with a zero-sum view of trade relations. If South Korea likes the deal enough to sign it, the thinking goes, it must have been a bad deal for the U.S. Trump’s threat to unilaterally withdraw the U.S. from KORUS was enough to push the South Koreans to the table to renegotiate aspects of the deal, and will likely result in a win for Trump.

But it’s important to note that when the most recent trouble began to intensify with North Korea, Trump’s vocal criticism of KORUS largely fell by the wayside. Bilaterals, by their very nature, are potentially subject to change whenever a new leader enters office or a geopolitical crisis erupts. That suits Trump fine—he cares only about the immediate perception of his presidency. But for those playing the long game, like China, multilaterals are the way to go. It was a game the U.S. played not so long ago, too. 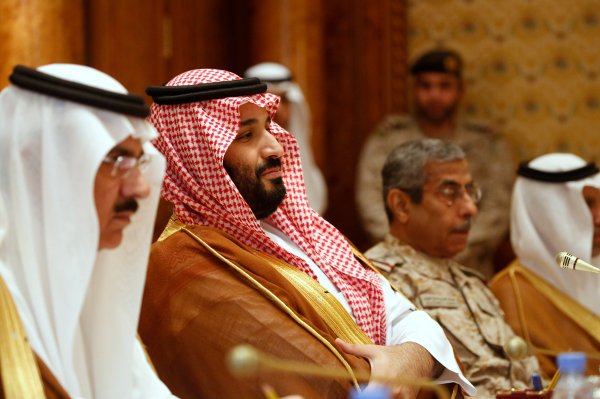 Here's Who Saudi Crown Prince Mohammed Bin Salman Purged to Pave the Way to Power
Next Up: Editor's Pick