On Wednesday night’s episode of The Late Show, Stephen Colbert wanted to welcome President Donald Trump back from Asia with a drink, but couldn’t quite manage the feat.

Colbert’s gag was yet another person poking fun at the president for his water-drinking method, which he put on display when he, as The Late Show captioned their video, “took a break mid-speech Wednesday to wet his dog whistle.”

Colbert aired a clip of the president’s press conference, which Trump paused in order to take a two-handed drink from a bottle of water. “That is hard to watch,” Colbert said, adding, “After watching that, I need a drink.” Colbert then imitated the president’s sip of water. While the audience laughed, Colbert noted that “everybody gets dry mouth”, so it wasn’t fair to tease a politician for staying hydrated. “I can’t stand here and make fun of a politician for drinking water,” said Colbert. “And Trump already did it way better with Rubio.” Colbert then aired a clip of Trump mocking Florida Sen. Marco Rubio for drinking water during his State of the Union response in 2013.

Rubio got his revenge on Trump, though, rating the president’s water-drinking technique, as a means of karmic retribution. 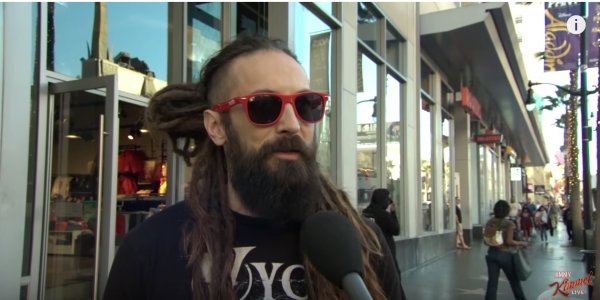 Jimmy Kimmel Found a Lot Of People Who Think Hillary Clinton Should Be Impeached
Next Up: Editor's Pick