Ever since Lebanese Prime Minister Saad Hariri abruptly resigned during a visit to Saudi Arabia on Nov. 4, he has struggled to assure his people–and the world–that he was not coerced, that he is not being held in the capital Riyadh against his will and that he is not a mere pawn in Saudi Arabia’s enduring quest to isolate archrival Iran. Few believe him.

That a Lebanese politician should be targeted by a foreign entity isn’t so unusual. After all, Lebanon has been a proxy battleground for Middle Eastern machinations for most of its existence. The greater question is why, at a particularly tumultuous time in regional relations–wars in Syria and Yemen, ISIS still a presence, an activist Israel, a resurgent Iran–Saudi Arabia would choose to disturb what had been a rare moment of calm in Lebanese politics.

The answer can be found in the outsize ambitions of Saudi Arabia’s newly ascendant Crown Prince Mohammed bin Salman. As the 32-year-old prepares to take power from his ailing 81-year-old father, he has embarked on a series of ill-fated foreign ventures, including a costly and bloody intervention in Yemen’s civil war and a diplomatic freeze on the small but wealthy Gulf nation of Qatar, which he accuses of supporting Iran. Qatar shrugged and responded by deepening ties with Tehran. The Yemeni war has become a humanitarian catastrophe, one made even worse when, after intercepting a missile attack on Nov. 4, the Saudis shut the country’s air and sea ports, blocking aid to some 7 million civilians at risk of starvation.

But the intervention in Lebanon, a country comprising competing religious sects that shares a tense border with Israel, could prove to be the most ill-fated of all. In 2016, with Saudi encouragement, Hariri’s Future Movement party formed a power-sharing government with militant group Hizballah, in order to end a political stalemate. But Riyadh now seems to be souring on the deal, accusing Hizballah and Iran of supporting anti-Saudi rebels in Yemen. On Nov. 6, Saudi Foreign Minister Adel al-Jubeir declared that his government would consider Lebanon a hostile state as long as the militant group was in power. The Saudis may have been hoping to provoke conflict between the group and its opponents on Lebanese soil, thus striking a blow against Iran’s regional dominance.

If that was the plan, it has backfired badly. The first sign that the Lebanese were unwilling to give ground came on Nov. 10, when Hariri’s top political rival, Hizballah leader Hassan Nasrallah, jumped to his defense and called for his rapid return to Lebanon. Billboards splashed with Hariri’s face sprung up in Beirut’s central Martyr’s Square. “Waiting for You,” they declared. Another political rival, Lebanese President Michel Aoun, told foreign ambassadors that Hariri had been “kidnapped.”

In trying to set Lebanon’s volatile sects against each other, Saudi Arabia seems to have achieved the near impossible: bringing them together. “It all snowballed in a way that the Saudis didn’t expect,” says Mohamad Bazzi, a Lebanese-American journalism professor at New York University, who is writing a book on Iran-Saudi proxy wars. “It shows that the leadership hadn’t done its homework.”

Salman is also unlikely to have had much support in this gambit from the U.S., even though he enjoys a close relationship with the Trump Administration and shares a personal bond with Trump’s son-in-law Jared Kushner. No one in Washington wants to see Lebanon back at the center of another proxy war, officials say; after all, the U.S. has given more than $1.4 billion in aid to the Lebanese military over the past decade in hopes of stabilizing the country.

That hardly means the affair will end with a newly unified Lebanon. The opposite is as likely. The country’s recent history is a tangled mess of competing alliances that has sucked regional powers like Syria, Iran and Israel into devastating wars, most recently in 1982 and 2006, often over seemingly inconsequential provocations. The youthful crown prince may have thought that by tugging a few threads of the Lebanese political knot, he could remake the region in Saudi Arabia’s favor. He might consider that knots make good nooses too. 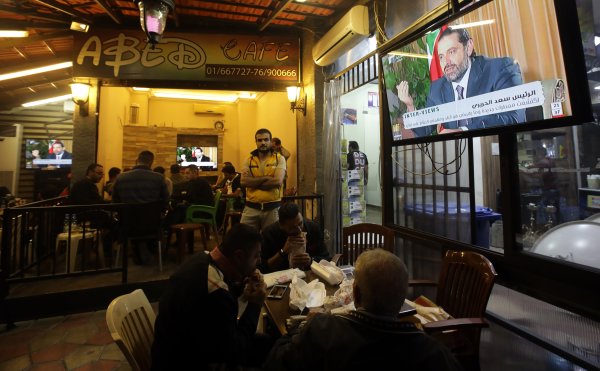 Fury Grows in Lebanon as Saad Hariri Stays Put in Saudi Arabia
Next Up: Editor's Pick