12 of the Best New Holiday Albums Out Right Now

‘Tis the season — for seasonal music. If you’re a little tired of the traditional song collections (still love you, Charlie Brown Christmas), consider switching it up with new releases from some of pop’s biggest stars (Sia!), music’s biggest voices (Josh Groban!) or more unusual electronic and rock contributions from artists like Kaskade and Echosmith. Between updated collections of tried-and-true covers to fuel your nostalgia and original compositions to move the genre forward, these soundtracks should help spice up the Christmas spirit. Plus, not one but two old-school boy bands released their own collections, a worthy cause for celebration in and of itself.

This year, blockbuster songwriter Sia turned her prodigious talent to holiday tunes, coming up with a top-notch selection of ten festive original songs for the season. The reggae-tinged “Santa’s Coming For Us” is probably destined to be a new classic, so you might want to get familiar with it now. Or, for a more subdued holiday mood, the balladic “Snowflake” is filled with plenty of relevant double entendre.

Lindsey Stirling, Warmer in the Winter (2017)

Not many violinists are name brands, but Stirling has developed a, well, sterling reputation over the years for her notable artistry with an electric violin. Warmer in the Winter gets a boost from some unexpected production moves (some of these covers are downright jazzy, while others add electric flair to traditional compositions) and from some choice featured vocalists, including up-and-comers Sabrina Carpenter and Becky G.

Groban’s angelic voice is here to soundtrack your holiday with this extensive 19-track selection of traditional holiday tunes. This year he’s gifted us with a deluxe version, which means six new recordings delivered in signature operatic style. Who doesn’t love a little Groban crooning in the background as the snow falls?

Hanson — yes, the family band of boys popular in the early oughts — is still around, and this year they’ve released an upbeat holiday album. Their light-rock updates on a bunch of traditional Christmas tunes will stir some nostalgia for their devoted fanbase. But even if you weren’t on the bandwagon back in the day, there’s no denying they still sound good together.

Another boy band from the early oughts that’s stuck around, 98 Degrees (that’s the one with Nick Lachey, in case your memory needs refreshing) has come back to deliver this, their second sleek holiday package of tunes. A little bluesy and filled with buttery old-school harmonies, the 98 Degrees offering is worth adding to your holiday rotation, if only for the cozy throwback vibes.

Indie-pop band Echosmith are getting in on the holiday game with a three-song EP for the season, including two original songs and one featuring country favorite Hunter Hayes. Acoustic and sweet, their take on the comes with some country-rock kick, and feels especially fresh in the midst of more traditional covers.

Aussie artist Sam Sparro is best known for songs like “Black and Gold,” in which he melds soulful vocals with electronic dance production. But his short-but-sweet new holiday EP is purely classic, a series of rich, beautifully-instrumented covers. It will appeal most to traditionalists — and satisfy those seeking a new voice to ring in the season with cheer.

You may not have expected a Christmas album from Kaskade, an electronic producer best known for his DJ residencies in Las Vegas clubs and arena shows. But now Kaskade Christmas exists, featuring vocals from artists like Skylar Grey and Dia Frampton. In the 13-song collection, Kaskade handily remixes and updates the hymns and party tunes of the season with understated electronic production. (You’ve never heard “Silent Night” quite like this, complete with mid-song beat drop.) Play this one for an ugly sweater party with all your coolest friends.

The American Idol season three winner has a new holiday album this winter, a strong compilation of 12 traditional tunes recorded in classic style. Her smoky, distinctive voice gives them each a twist of her own.

Indie-pop singer Michaelson packaged up five of her best Christmas covers for her Snowfall EP, a delightfully spare and sweet collection. This isn’t a jolly listen, but more of a nostalgic and acoustic holiday playlist to throw on once the guests have disappeared into the cold, the fire has burned low and you’re snuggled up sipping a mug of hot cocoa.

The legendary trumpeter makes a splash with The Christmas Wish, adding his own jaunty signature to a number of medleys and seasonal favorites. An all-instrumental album, this one is an easy choice for that subtle festive soundtrack.

Iconic No Doubt frontwoman Stefani put out an album of her own in 2016, but it flew somewhat under the radar compared to the blockbuster success of her early-2000s solo hits. This year, she opted instead for a holiday compilation. It’s all the songs you know and love — “Let It Snow,” “Santa Baby” and the rest — but with Stefani’s recognizable warm vocals and bouncy production. And, yes, there’s a Blake Shelton duet. 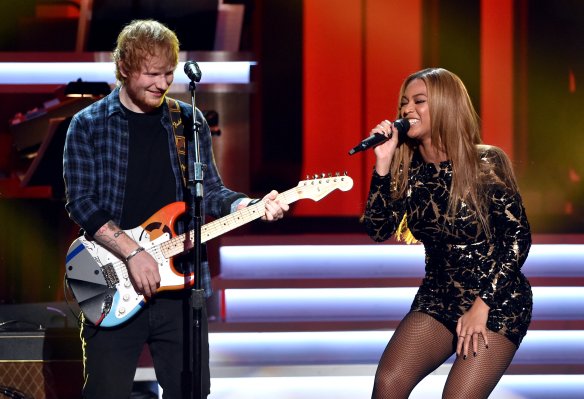 Hear Beyoncé and Ed Sheeran Duet on 'Perfect'
Next Up: Editor's Pick