'He Didn't Pinch It, He Grabbed It.' Another Woman Has Accused Roy Moore of Groping Her

Another woman came forward on Wednesday to accuse Alabama Senate candidate Roy Moore of sexual misconduct, saying he groped her in 1991 after she met with him in his law office to discuss custody of her children.

Tina Johnson told AL.com that Moore grabbed her buttocks as she was leaving his office behind her mother. Johnson was 28 at the time, and they had met with Moore to sign over custody of her 12-year-old son to her mother.

“He didn’t pinch it; he grabbed it,” she told AL.com, adding that Moore had made her uncomfortable during their meeting as well.

“He kept commenting on my looks, telling me how pretty I was, how nice I looked,” she said. “He was saying that my eyes were beautiful.”

Moore has dismissed the allegations as “lies and smears.”

“If you are a liberal and hate Judge Moore, apparently he groped you. If you are a conservative and love Judge Moore, you know these allegations are a political farce,” a campaign spokesperson said in a statement Wednesday night. “Twelve women who have dated and worked closely with the Judge came out tonight to affirm his proven character, and you are going to see hundreds of women who really know him step forth in support of him.” 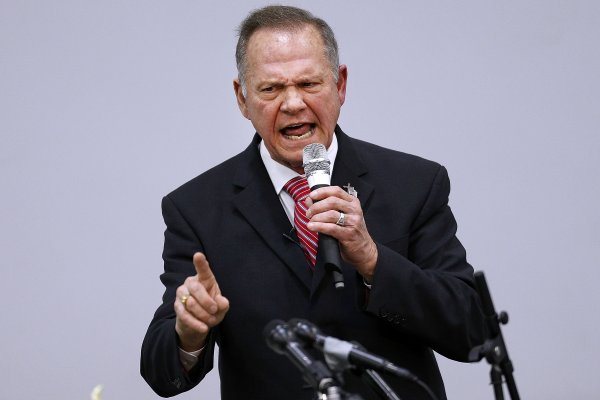 Roy Moore's Campaign Wants Experts to Analyze One of His Accuser's Yearbooks
Next Up: Editor's Pick