‘You Told Me, Daddy, There Were No Bad Guys Here.’ Daughter Afraid to Go to School After California Shooting

When 5-year-old Cherokee Wells-Ferreira started kindergarten at Rancho Tehama Elementary School in California nearly three months ago, her father reassured her she would be safe at school, where there were no “bad guys” to harm her.

On Tuesday morning, she found herself lying on the floor, under a classroom desk, hiding with about a dozen other children from a gunman who had attacked their school. Her classmate was shot through the window while he was cowering under a desk. At the end of Kevin Janson Neal’s rampage, six people were dead, including the shooter, and at least 10 others were wounded, authorities said. Cherokee remembered her dad’s words.

“You told me, daddy, there were no bad guys here,” she told her father, Coy Ferreira.

“I’m upset because I felt like I was lying to her,” Ferreira told TIME on Wednesday. “I didn’t know what to say. I still don’t know how to feel about that. You want the best for your kids, you know. It’s a school. It’s supposed to be the safest place your kid can be.”

Ferreira, 32, said school was about to start about 8 a.m. when gunshots started ringing out as children were gathering in the playground outside. He thought it was the sound of firecrackers until teachers started screaming for everyone to get inside the school and into locked classrooms.

Ferreira grabbed his daughter, and another girl who was too stunned to move, and rushed into a classroom. The children huddled underneath tables with their backpacks still on. At the instruction of their teacher, most of the students then made their way to the back office in the classroom. But at least three children were too scared to leave their hiding spots.

Ferreira shut off the lights, but seconds later the shooter opened fire through the windows and walls.

“I thought I was gong to meet my maker,” he said.

Remembering the heroism of the teachers slain in the Sandy Hook elementary school shooting, Ferreira said he was prepared to stand between the gunman and the students. But the shooter eventually moved on.

Ferreira’s daughter was unharmed but “shaken up.” She is now too scared to return to school after their two-and-a-half week Thanksgiving break is over. But her father insists on not letting the “bad guy” win.

“It doesn’t happen every day,” he said. “We have to show them there’s nothing to be fearful about.” 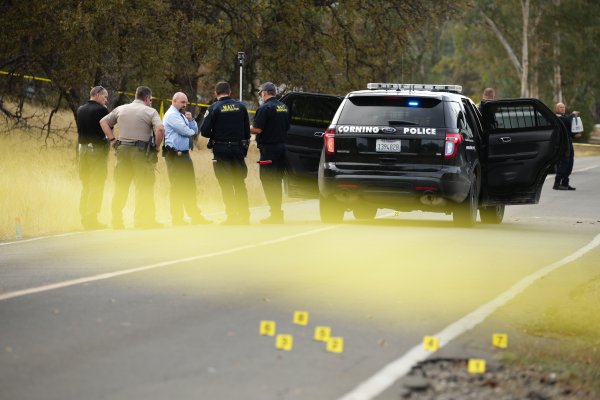 California Shooter Killed His Wife Before Rampage: Police
Next Up: Editor's Pick