Sofi Tukker — also known as the New-York-based team of Sophie Hawley-Weld and Tucker Halpern — is the Grammy-nominated production duo behind some of the most creative dance-pop hits of the last few years. Even Apple has taken note, using their recent single “Best Friend” to soundtrack its ubiquitous iPhone X ads. But Sofi Tukker have been dance music favorites long before tech executives picked up on their infectiously upbeat vibe. They were up for a Best Dance Recording Grammy last year, following the release of their 2016 EP Soft Animals with standout hit “Drinkee.” “Best Friend,” meanwhile, has topped the iTunes dance charts, is climbing Billboard‘s dance chart and is getting steady rotation on pop radio.

And now there’s “Energia,” premiering here on TIME. Combining bossa nova swing, a clubby jungle drumbeat and insistent strings, it’s sung by Hawley-Weld in Portuguese — something of a trademark for the two producers, who met in college in 2014 and have been collaborating ever since. An insatiable energy and multicultural influences set them apart, whether it’s working with a Brazilian poet for lyrics or making good use of unusual instruments, like the Bolivian charango. “Energia” is an apt name for the song, too, with its caffeine-jolt of a rhythm.

“We kept pushing the tempo faster and faster just to see how fast we could make it,” Halpern tells TIME about creating the track.

Up next, Hawley-Weld and Halpern have no plans to slow down: club remixes, more music and colorful videos are all on the horizon. They’re also touring the East Coast alongside electronic outfit ODESZA before heading off to Europe this winter and taking their festival-ready tunes to Lollapalooza Brazil.

TIME: What’s the story behind “Energia?”

HAWLEY-WELD: It’s another poem by our friend, the Brazilian poet Chacal — the same poet we worked with on “Drinkee” and “Matadora.” We wanted to make something really fun and upbeat and chanty.

HALPERN: We kept pushing the tempo faster and faster just to see how fast we could make it, while still being able to sing it. We settled on 135 bpm.

How does the songwriting and production process work for you two?

HAWLEY-WELD: We made the whole song in a garage in Florida. We covered the floor in astroturf and danced around while making it. We were both in the room the whole time and neither of us remember who did what.

HALPERN: We also brought back the charango, the Bolivian stringed instrument we used in “Matadora,” in the chorus.

HAWLEY-WELD: I think it’s the most beautiful sung language. It is naturally so sensual and melodic.

HALPERN: We wanted to make something that was more about the feel than about the meaning. That’s one of the things I love about Portuguese. Because I don’t understand it, it becomes more like an instrument and I really have to love the melody!

It’s been a big season for Sofi Tukker, especially with the Apple ad. How, if at all, has that kind of broader recognition changed or shaped your approach to music?

HAWLEY-WELD: It’s given us affirmation and confidence to be totally ourselves and continue making music that we love and want to hear!

HALPERN: We are really grateful. 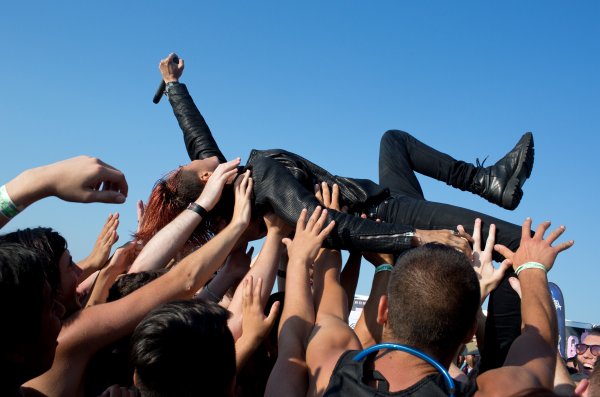 The Vans Warped Tour Is Ending After the 2018 Festival
Next Up: Editor's Pick