Scientists Have Discovered a New Planet Close to Earth. Here’s Why It's So Exciting

If life is lurking somewhere in space, it’s done an awfully good job of hiding itself so far. But the jig may be up now that we have a better idea of where to look. That’s clearer than ever with the announcement in the journal Astronomy and Astrophysics of a newly discovered exoplanet orbiting an otherwise unremarkable star named Ross 128. Not only is the planet precisely the kind of place that could support biology, it’s located right down the street by cosmic standards — just 11 light-years from Earth.

The new world, prosaically named Ross 128 b, was discovered by a European telescope in the Chilean desert that looks for planets by what’s known as the radial velocity method. Even worlds orbiting the nearest stars are impossible to see by conventional telescopes. That’s partly because the planets are so tiny, in relative terms, and partly because the glare from the star washes out the view of anything nearby, much the way the glare from a streetlight makes it impossible to see a moth fluttering next to it.

Instead, astronomers look for the tiny wobble in the star that’s caused by the gravitational tugging of an orbiting body. If you know how to read the wobble you can learn a lot about the planet that’s causing it, and in this case that analysis is yielding some happy surprises.

According to the five-nation team of researchers who made the new discovery, Ross 128 b is no bigger than 1.35 times the size of Earth — very much the kind of planet that would have a solid surface where life could emerge. It orbits its parent star once every 9.9 days — an exceedingly fleeting year caused by the fact that the planet is 20 times closer to its star than Earth is to the sun. That ought to make the planet blisteringly hot, except that Ross 128 is a red dwarf, a far smaller, far cooler star than our yellow, so-called Class G star.

Even orbiting so close, Ross 128 b could thus have a surface temperature that averages about 269 degrees K, which sounds nasty until you realize that that comes out to about 73 degrees F (23 degrees C). What’s more, the planet rotates relatively slowly, meaning that if it has an atmosphere — by no means a sure thing — it would not have flung it off the way a rapidly spinning planet would over time.

But it’s something else in the nature of the star, not the planet, that makes the new announcement especially promising. We know of only one planet in the universe — our own — that harbors life, and so it has always made scientific sense to concentrate our search for extraterrestrial biology on planets circling sunlike stars. Those stars, however, are relatively rare, while red dwarfs make up perhaps 75% of all of the stars in the galaxy. Simple probability, then, says that they might be a far better place to go looking for living planets, provided those planets cuddle up close to the star’s hearth the way Ross 128 b does.

This is not the first time astronomers have discovered precisely this kind of Earth-like planet orbiting comfortably close to a red dwarf. Just last summer, a team of researchers who also used the wobble method discovered a planet orbiting an even closer red dwarf; indeed that dwarf, Proxima Centauri, is closer to Earth than any star in the cosmos, just 4.2 light-years away.

But the planet, Proxima Centauri b, faces some challenges Ross 128 b doesn’t. Red dwarfs can be volatile, sending out periodic flares that could blowtorch any atmosphere on a nearby planet off into space and destroy any life that might survive with their lethal levels of X-ray and ultraviolet radiation. In 2016, a team from the Smithsonian Astrophysical Observatory detected 66 separate flare events on Proxima Centauri. That would not necessarily be fatal to life on the nearby planet, but it wouldn’t do it any favors either. Ross 128, by contrast, appears to be a quieter star, with less frequent flaring — which is characteristic of more mature red dwarfs, further along in their life cycles.

None of this says that Ross 128 b or Proxima Centauri b or any other exoplanet has so much as a single living cell on it. What it does say is that the odds of life are at least greater than we knew and our search techniques are improving steadily. If biology is out there anywhere, we’re likelier to find it than we’ve ever been before. 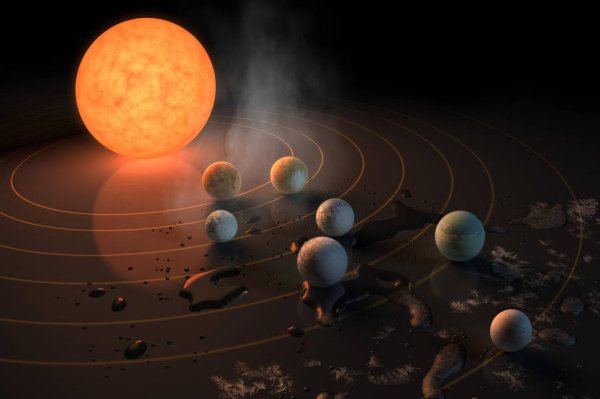 New Earth-Like Planet Could Have Life
Next Up: Editor's Pick