A newly discovered exoplanet could harbor life, scientists say. And it’s even (relatively) close to Earth – only 11 light-years away.

Ross 128 b has some similar characteristics to Earth, astronomers said in a new study published in the journal Astronomy and Astrophysics. It’s roughly the same size and may have a comparable surface temperature, an environment that could allow life to flourish.

“The special properties of this system means that we are contributing our bit on the search of an Earth 2.0.” Nicola Astudillo-Defru, one of the study’s co-authors at the University of Geneva’s observatory, wrote in an email to CNN.

Ross 128 b orbits around its host star, Ross 128 (with no letter), every 9.9 days. The host is what’s called a red dwarf star, the most common type of star found in the universe. Red dwarfs are also the coolest and most faint.

Scientists are keenly interested in red dwarfs because other exoplanets have been found revolving around the abundant stars.

And even though Ross 128 b is 20 times closer to its star than Earth is to the sun, the planet could still have a comfortable temperature because red dwarf stars are so much cooler, astronomers say. The planet also receives only 1.38 times the radiation that Earth gets from the Sun.

In addition, astronomers describe the star as “quiet,” meaning it’s unlikely to emit flares that could severely harm or outright decimate life on a planet.

“A detailed study investigated the movement of our stellar neighbor by combining data from the Hipparcos satellite and ground-bases velocimeters,” Astudillo-Defru wrote to CNN. “They list all the close encounters with other stars, and because of the relative movements of stars and the Sun, it results that Ross 128 will be our closest star.”

It’s not as close as Proxima b, currently the closest Earth-like exoplanet known to man, but it could be one day because Ross 128 and its planet are moving closer to our solar system. And it might not be the only one.

“I plan to continue searching for new worlds, specially around Ross 128 because it is likely that there are more planets,” Astudillo-Defru said. 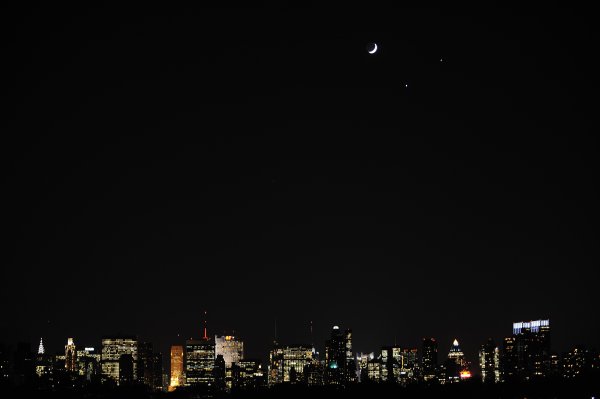 See the Venus-Jupiter Conjunction
Next Up: Editor's Pick