Fox News host Sean Hannity said late Tuesday that embattled Alabama Republican Senate candidate Roy Moore has “24 hours” to explain “inconsistencies” in his responses to mushrooming sexual misconduct allegations or he should bow to pressure to drop out of the race.

“For me, the judge has 24 hours,” Hannity said during his show, just days after he generated criticism by defending Moore. “You must immediately and fully come up with a satisfactory explanation for your inconsistencies that I just showed.”

Moore, who is running for the Senate seat vacated by Attorney General Jeff Sessions, is fending off accusations from at least five women who say he made inappropriate advances toward them when they were teenagers and he was in his 30s. A number of Republican leaders, including Senate Majority Leader Mitch McConnell, have distanced themselves from Moore and called for him to withdraw from the race. Moore has repeatedly denied the allegations and has pledged to stay in the race ahead of the Dec. 12 special election against Democrat Doug Jones.

Hannity initially defended Moore last week following his interview of the Senate candidate on Friday. “How do you know if it’s true?” Hannity posed to his viewers. “How do we — what’s true? What’s not true? How do you ascertain the truth? What happens when it’s 38 years later?”

Hannity’s comments prompted a number of brands to pull their ads from his show. Days later, he reversed his position, citing a Monday news conference in which the fifth accuser, Beverly Young Nelson, came forward and displayed her high school yearbook with what she said was Moore’s signature.

“Between this interview that I did and the inconsistent answers,” Hannity said. “Between him saying ‘I never knew this girl,’ and then that yearbook comes out. You must remove any doubt. If you can’t do this, then Judge Moore needs to get out of this race.”

In his interview with Moore, Hannity asked if Moore had ever dated teenage girls. Moore replied, “Not generally, no.” 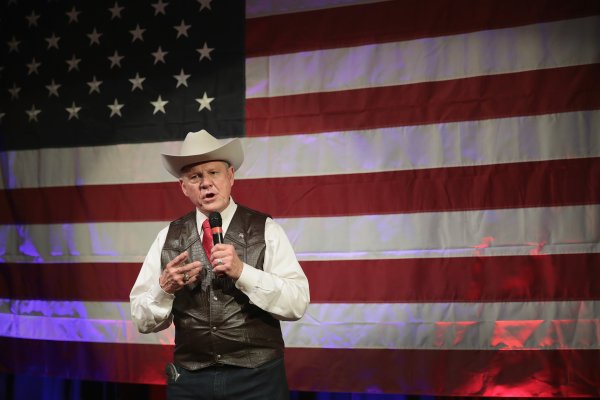 Republicans Are Stuck With Roy Moore. What Now?
Next Up: Editor's Pick