Zimbabwe’s Military Has Taken Control of the Capital. Here’s What We Know

By Tara John and Joseph Hincks

After a night of confusion in which tanks rolled onto the streets of Zimbabwe’s capital Harare, the country’s military said early Wednesday that it had taken President Robert Mugabe into custody. While the armed forces appear now to be effectively in control of the city, a military spokesperson took to the airwaves to insist that what just happened was not a coup d’etat.

“We wish to make it abundantly clear that this is not a military takeover,” the spokesperson said on a nationwide broadcast after soldiers took over a state-run television channel. “We are only targeting criminals around [Mugabe] who are committing crimes that are causing social and economic suffering in the country in order to bring them to justice.”

The spokesperson also said the military guaranteed the security of Mugabe and his wife, and sought to reassure the public the situation would soon “return to normalcy.”

The crisis was caused by a power struggle over who would succeed the 93-year-old dictator. It also marks the end of the political aspirations of Mugabe’s 52-year-old wife, Grace Mugabe, who is reportedly in custody with him.

Details remain scarce and this story is developing. Here’s what we know:

The Associated Press reported Wednesday that armed soldiers in armored vehicles had been stationed throughout the capital, and that at least three explosions were heard. Soldiers then took over the headquarters of the state broadcaster and announced that they were now in charge as the president and his wife were detained.

The U.S. Embassy was closed to the public and U.S. citizens have been advised to take shelter where they are, due to “the ongoing political uncertainty through the night.”

Why is it happening now?

The military’s intervention comes less than 48-hours after the army commander warned that he would “step in” to calm political tension should a recent purge of government officials continue, and about one week after Mugabe sacked his Vice President Emmerson Mnangagwa.

Liberation army veteran Mnangagwa was sacked amid infighting among the Zimbabwe African National Union – Patriotic Front (Zanu-PF) party, which has ruled the country since independence in 1980. One faction of the party is comprised of former liberation fighters who are loyal to Mnangagwa. They are facing off against members of the party’s youth faction and younger cabinet ministers, who are loyal to Mugabe’s wife, Grace.

Mugabe’s dismissal of Mnangagwa, for allegedly plotting against the government, appeared to pave the way for Grace Mugabe to become the president’s successor. But liberation war veterans and military service members hold much of the power behind Mugabe’s rule, and they intend to choose who will replace the nonagenarian.

Who is Grace Mugabe?

The president’s wife is a deeply polarizing figure in her country. The former secretary married Mugabe in 1996 after the death of his first wife. She quickly earned the nickname “Gucci Grace” for her lavish shopping trips abroad despite being on an E.U. sanctions list since 2002, when restrictions were imposed as punishment for electoral fraud and human rights abuses committed by the regime. When questioned about her spending habits, she reportedly said: “I have very narrow feet, so I can only wear Ferragamo.”

In August this year, she made headlines for allegedly lashing a model with a plug after finding her in a hotel room with her two younger sons, Bellarmine and Robert Jr. She managed to escape prosecution when the South African government allowed her to claim diplomatic immunity.

Beyond the extravagance, she has proven to be politically ambitious. In 2014, she was unveiled as a potential successor to her husband, the world’s oldest head of state, after gaining a seat in Zanu-PF’s powerful politburo. That year, she influenced the dismissal of another competitor to the throne, former Vice President Joice Mujuru.

This July, she challenged her husband to name his preferred successor and has explicitly expressed her desire to succeed him.

He is under house arrest, according to South African President Jacob Zuma who spoke to his counterpart on Wednesday. “President Zuma spoke to President Robert Mugabe earlier today who indicated that he was confined to his home but said that he was fine” read a statement from the South African president’s office.

A spokesman for the Zimbabwean military, Major General SB Moyo, said in a televised broadcast earlier on Wednesday that Mugabe and his family were “safe and sound.” But he did no provide information on Mugabe’s whereabouts.

Is this a coup?

That depends on who you ask. It has all the hallmarks of one, including foreign embassies issuing warnings to its nationals and the takeover of a national broadcaster, but the military insists that it is not a takeover.

The Zimbabwe National Liberation War Veterans Association, which is funded by the government, praised the military’s action as “a bloodless correction of gross abuse of power,” according to the Associated Press.

What will happen to Mugabe?

That also remains uncertain. Victor Matemadanda, the leader of the War Veterans Association, said on Wednesday that the nonagerian should be removed as Zimbabwe’s president.

Experts speculate that Mugabe will be held as a figurehead until a new ZANU-PF leader is anointed. “The military, using the leverage gained from the insurrection, is likely to broker a power sharing deal and transitional agreement between President Mugabe and former VP Mnangagwa” IHS Markit Analyst Theophilus Acheampong says in an email. “Mnangagwa is likely to lead a transitional government, which will likely be composed of his allies including former finance minister Patrick Chinamasa.” 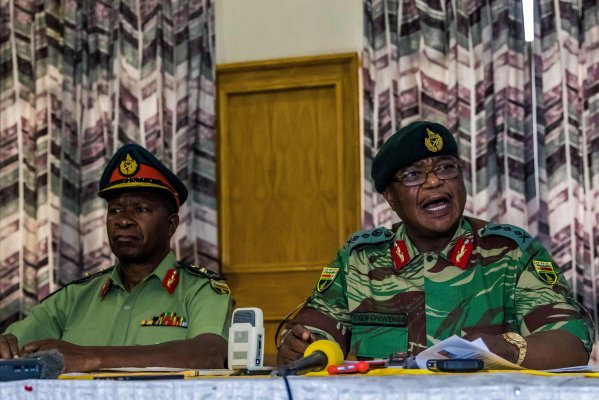 Rumors of a Coup Are Circling Around Zimbabwe's Robert Mugabe
Next Up: Editor's Pick