FDR's hand-print taken during a 1937 palm-reading session
Heritage Auctions
By Olivia B. Waxman

Perhaps, in the weeks after his second term began, Franklin Roosevelt sought a prediction of what lay ahead for him and whether his plans, such as his controversial attempt to add more Supreme Court justices, would succeed. Perhaps, given the President’s fear of Friday the 13th and of the practice of lighting three cigarettes on a single match, he was feeling superstitious. Perhaps he and First Lady Eleanor Roosevelt were merely interested in experiencing a craze that was sweeping the country in the late 1930s.

For whatever reason — the exact answer isn’t clear — on Mar. 1, 1937, at the personal invitation of Eleanor Roosevelt, celebrity palm reader Nellie Simmons Meier of Indianapolis visited the White House and performed a reading on the President and his inner circle. In the wake of that day, the Roosevelts asked Meier not to publicize assessment of their characters. Now, however, there’s a chance to read it, as palm-reading reports and original signed handprints of the Roosevelts are going up for auction on Dec. 2 in Dallas. Heritage Auctions says the bidding starts at $10,000, but the auction house expects that the collection could potentially fetch as much as $20,000.

According to Meier’s account of the meeting, a sneak peek at which was provided exclusively to TIME by Heritage Auctions, Eleanor Roosevelt had scheduled to host her at the White House on Feb. 26. When Meier arrived, Eleanor told her that and the President also wanted to see her because he had been interested in the reports he had been receiving through his secretaries, and “if I could come back on Monday [March 1] at four, he would make his engagements to fit that time.”

Meier’s palm readings (the write-up of which spans about two dozen pages) don’t necessarily tell us anything about the Roosevelts that historians haven’t hit upon in their own, less mystical fashion. She writes that Eleanor’s handshake was “sincere,” while FDR’s was “FINE.” She highlights their ambition, ability to multi-task and capacity to relate to those less fortunate than themselves. About the President, whom she noted was double-jointed, she wrote, “Rarely have I looked at hands in which the markings showed such a wide range of ideas, such great vitality and such ease of accomplishment along so many avenues of physical and mental activity.” About Eleanor, she wrote, “The wide stretch between first and second fingers indicates the independence that makes her a law unto herself,” adding that the First Lady’s “fairly supple” fingers illustrated Eleanor’s ability to emphasize with the plight of the underprivileged.

The document stands out for its amusing observations, though some lines aren’t particularly flattering.

All of Mrs. Roosevelt’s fingers “flare like a starfish,” but it was her thumb that Meier found “extremely interesting” because of the way it reflected contradictory personality traits. “the first phalange of the thumb, showing the will power, being longer than the second phalange, indicating logic and reason, shows the natural tendency to act first and reflect afterwards.” On FDR, she wrote, “The high mount of Jupiter, under the first finger, indicates the love of power, the use of which is largely influenced by his love of approbation.” And according to her, the “short middle phalanx” meant he had “little interest” in modern art, which is interesting considering his New Deal programs gave jobs to many modern artists. “Anything that requires an explanation as to its meaning does not come under the cloak of art, broad as it is,” as she summed up his view of what does and does not constitute art.

Such opinions are perhaps part of the reason why the Roosevelts didn’t want the public to find out about these assessments.

A letter dated “Hyde Park, N.Y., Oct. 7, 1937,” with Eleanor’s signature on it, informed Meier that “the President’s secretaries are very much disturbed because they do not think it would be advisable while the President is still in the White House, for your material to appear either in your book or in the file of the Library of Congress.” Four days later, Secretary to the President Stephen Early reiterated that “no part of the material referring to him could be released in any form while he is in public office nor after the relinquishment of his public duties, except through specific permission to be granted if and when circumstances in his judgment warrant.”

Even without any publicity about the White House visit, Meier was having a moment that year. A book of her palm readings, Lions Paws: The Story of Famous Hands, also came out in 1937. A LIFE profile of her later that year reported that she had read 20,000 palms in her career, and her popularity came during “a recent eruption in interest” in palm reading, which made up “a good part of the estimated $125,000,000 that Americans spend each year on fortune-telling.” 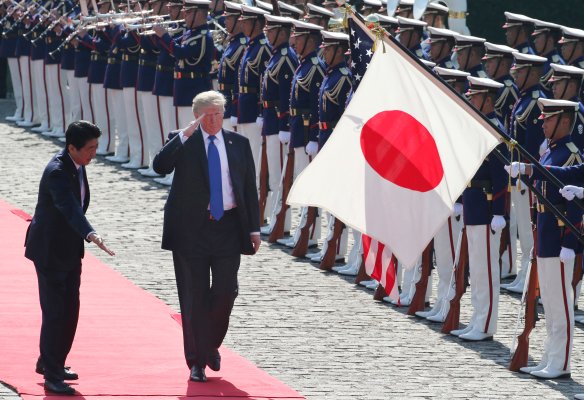 President Trump Was in Asia for 12 Days. Here's What He Missed at Home
Next Up: Editor's Pick