Can Congress Jail Witnesses Who Refuse to Cooperate?

With both the House and the Senate conducting investigations into Russian meddling in the 2016 election, committees are issuing subpoenas and dealing with witnesses who may not be eager to talk.

So what happens if a witness refuses to cooperate?

Congress can hold people in contempt if they obstruct committee proceedings by refusing to testify or provide documents, or for bribing or libeling a member. In 1821, the Supreme Court ruled that Congress needs the power to hold someone in contempt or else it would be “exposed to every indignity and interruption that rudeness, caprice, or even conspiracy, may meditate against it.”

The full House or Senate can approve a contempt citation by a majority vote, and then must hand the matter to the U.S. attorney for the District of Columbia, “whose duty it shall be to bring the matter before the grand jury for its action,” according to the law.

One contempt citation in recent memory was brought against Anne Gorsuch, the mother of new Supreme Court Justice Neil Gorsuch, when she was EPA Administrator in the 1980s. The House cited her with contempt, but the Justice Department didn’t prosecute the case.

And in October, the House passed a bill that would strengthen congressional subpoena enforcement and allow expedited court review if witnesses don’t comply with subpoenas.

But, frequently, when the topic of contempt-of-Congress charges comes up, a far harsher possibility makes headlines: the Capitol jail.

There is some real history backing up that threat — in that 1821 case, the Supreme Court stood behind Congress’ right to imprison people. But these days, it’s just as likely that the source for the idea is a bit of confusion.

The “Old Capitol Jail” was once a major Washington, D.C., landmark. Most famously, it was used to detain Confederate spies and soldiers during the Civil War era. As one James Joseph Williamson would later recount of his time imprisoned there, “Conditions in the Old Capitol differed in many respects from the prison camps. Prisoners in the Old Capitol were mostly civilians, except where soldiers (either prisoners of war or men charged with offenses), were brought in and kept until they could be sent to places designated; or prisoners from other prisons held over until they could be shipped South for exchange.”

But that building doesn’t exist anymore, though its address is still important as the location of the Supreme Court building.

As the House of Representatives’ Office of the Historian has explained, most people in American history who have been held by the House over contempt charges (a very small number to begin with) have not been put in any specific “Capitol Jail.” Rather, they’ve just been put under lock and key within a spare room at the Capitol or even in a nearby hotel.

In a 2003 Senate oral history interview, longtime staffer Chuck Ludlam told the Senate Historical Office that — as part of the work he was doing to advocate for an idea to better enforce subpoenas — he had once spoken to the Architect of the Capitol about the matter, and was told that there was evidence that “several rooms” at the Capitol had been used to guard people at one point or another, but that it’s not clear that any of those rooms would have been only used for that purpose. And one of the rooms that’s most commonly mistaken for a jail at the Capitol (it’s in the basement and has bars) was in fact meant as a possible spot for George Washington’s tomb.

But, just because there’s no physical jail doesn’t mean there’s no right for Congress to detain individuals — and in fact the Capitol Police do maintain a holding cell a few blocks away.

Write to Tessa Berenson at tessa.berenson@time.com and Lily Rothman at lily.rothman@time.com. 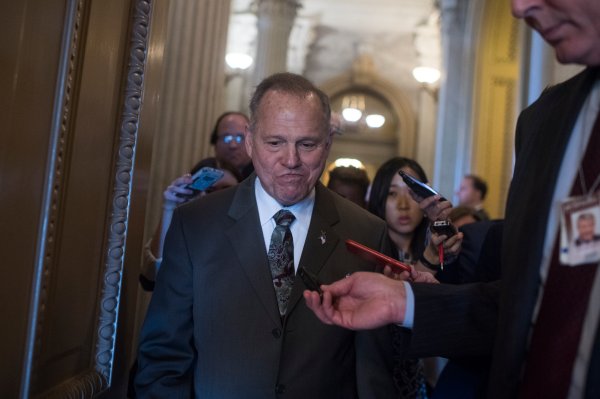 3 Senators Suggested Expelling Roy Moore If He Wins. Here's How That Would Work
Next Up: Editor's Pick