Years before Susan Fowler came forward with her story about the mistreatment she suffered as an engineer at Uber, journalist Sarah Lacy began calling out misogyny within the startup’s culture. As editor of the tech website PandoDaily, Lacy criticized Uber for its mixed record on background checks, its tracking user data on one-night-stands and then-CEO Travis Kalanick’s comments about his own sex appeal. In 2014, she declared in a post that she was deleting the app. Uber took notice; at a dinner in New York City, executive Emil Michael told Buzzfeed Editor Ben Smith how he’d like to get revenge on critical members of the media, particularly Lacy. (Michael later apologized and Kalanick condemned the comments, both stating they weren’t representative of true plans.) In her new book, A Uterus Is a Feature, Not a Bug: The Working Woman’s Guide to Overthrowing the Patriarchy, Lacy details what it was like to do public battle with Uber.

On a drizzly London night in November 2014, I received a call from BuzzFeed editor Ben Smith telling me that Uber, the largest and most misogynistic private company in tech, had reportedly just put a $1 million price tag on shutting me up.

From about 2012 on, my website PandoDaily had been one of the lone critical voices amid a global business press that was enamored with Uber. When we reported a story on passengers getting assaulted in Ubers, executives told our reporter that one of the women attacked was drunk and “dressed provocatively.” This from the company that told regulators it should get special treatment because it was helping women get home safely if they’d been drinking.

I explained in a post on Pando why I was deleting the app. I didn’t care whether Uber’s (never backed up) claim that it was safer than cabs was true or not. I knew from experience: Uber went after victims. It wasn’t worth my safety or the safety of the women I loved.

Like a lot of our past reporting on Uber, this story was widely picked up. We weren’t meaningfully hurting their downloads or their ability to raise money, but we were hurting their brand in Silicon Valley and their ability to hire. And talent is lifeblood in the Valley. Uber finally decided there was only one way to silence me: to try to destroy my personal life and reputation by any horrific means necessary.

At a dinner filled with journalists in New York, then-CEO Travis Kalanick was attempting to reboot his image in the press. It didn’t help that at the other end of the table, an Uber executive named Emil Michael was detailing to Smith a plan he had to silence journalists, starting with me. (The dinner was believed by some to be off the record, but Smith says Buzzfeed was not alerted.)

Over dinner, he outlined the notion of spending “a million dollars” to hire four top opposition researchers and four journalists. That team could, he said, help Uber fight back against the press—they’d look into “your personal lives, your families,” and give the media a taste of its own medicine.

Michael was particularly focused on one journalist, Sarah Lacy, the editor of the Silicon Valley website PandoDaily, a sometimes combative voice inside the industry. . . It was suggested that a plan like the one Michael floated could become a problem for Uber. Michael responded: “Nobody would know it was us.”

Michael tried to brush this off later as “blowing off steam” and “a drunken rant.” Yet for a drunk man supposedly blowing off steam, he detailed to Smith a pretty precise plan, including the types of things he would try to spread into the media to silence me, in particular by going after my family. He even said I should be held responsible if women who had deleted Uber got sexually assaulted in cabs.

I paced outside an Indian restaurant in London, my phone pressed to my ear, as Smith detailed all this to me and asked if I had any comment. I had spent my career pissing people off in Silicon Valley and working with other brilliant journalists who did the same. And yet, I had never heard of anyone proposing anything this evil.

I thought of my children Eli and Evie. Right about then, they were probably wrapped in kitten and dinosaur pajamas, giggling and running through the house in a last-ditch effort to fight bedtime. If this “oppo research” plan was what the executives were bragging about at a dinner with journalists, what would they do to silence me that they wouldn’t brag about?

I had two choices when Smith published his story and seemingly every media outlet in the world was hounding me for comment. I could do what I usually did when scandal erupted around me — let my work speak for itself and wait for it to blow over. Or I could fight back.

It was clear to me the only way to be sure Uber would never go through with this plan was if everyone in the world knew what they’d threatened. That was the only way my family would be safe. Be so loud and so omnipresent that in their war room meetings (yes, they really called their meeting room “the war room”) someone would tell Michael, “She isn’t worth it! Just walk away!”

I had another motivation, too. Michael had made it clear that I was only the first reporter he wanted to go after. I knew I had a megaphone others didn’t. I was also lucky that I worked for myself, and I controlled my board. I had no boss who could tell me to stop. Odds were the next woman this company attacked wouldn’t have those luxuries. If another story like this ever came out, I wanted the victim in question to immediately get the benefit of the doubt. My maternal rage extended beyond my family to every single woman this company might target next.

I did dozens of TV interviews. My story was written up in USA Today, the New York Times, the Washington Post. I went on the attack on social media whenever anyone would try to defend or normalize this behavior. I called out Uber’s investors by name for pretending to support women in our industry and being dead silent now. Some of those were Pando’s investors, too. And I made it a story beyond just me: It was proof of the toxic, misogynist culture that had made me delete the app to begin with.

Nothing about this was fun. One of my investors sent his security team to my house as the story exploded in the first 24 hours and my face was everywhere as the enemy of Uber. After an initial security assessment, it was determined that armed guards would follow my children and me for two weeks. I even had to take armed guards to Yo Gabba Gabba! Live.

A lot of “friends” and even investors turned on me. Some of our mutual investors would not even respond to my emails. Uber’s surrogates — including, not joking, the actor Ashton Kutcher — called me a “shady journalist.”

I have essentially spent two years (and counting) in a macro-hostile work environment when it comes to covering this company. But I have continued to report on Uber, exposing the depths of the fraud and struggles in their Chinese operation a full year before the company finally pulled out of the country completely. We were one of the first publications to raise questions about whether their core business model even worked.

Anything short of continuing to doggedly report the truth about Uber, no matter the consequences, would have been doing Michael’s dirty work for him, the way guilt does the patriarchy’s dirty work in women’s minds. If my own fears over security, safety, and reputation self-censored me, it would have been just another version of Uber’s plan working. You don’t get to threaten my company, my children, my integrity, and win.

In 2016 a judge backed up my instinct that this was more than just some drunken rant of a single executive. Despite Uber’s denials at the time that they would never hire covert oppo researchers to smear critics, Uber did exactly that to Spencer Meyer, who was a plaintiff in a lawsuit against Uber, and his attorney Andrew Schmidt.

Uber hired a private investigative firm and launched an unethical investigation into the personal and professional lives of Meyer and Schmidt, calling people they knew and lying about who they were in order to dig up information they could use against them. As shown in court documents, the Uber contact wrote via email: “Would like to keep any communication about it encrypted or over chat to avoid potential discovery issues.” It was the fourth time Uber had hired the firm, according to a deposition.U.S. District Judge Jed Rakoff said at discovery, “The court cannot help but be troubled by this whole dismal incident,” adding that the tactics were possibly “criminal” in nature.

But a lot of journalists swept that scandal under the rug. It took until 2017 for my original claims about Uber’s dangerous misogynistic culture to become widely vindicated. Susan Fowler, a female engineer, exposed systematic and blatant misogyny at the company, from sexual propositions by management to HR cover-ups. It was shocking that one person had experienced so much sexism in one year at a company.

When her story came out, Fowler was absolutely 100% believed by the press and the wider public. And the next woman who comes forward in Silicon Valley will have even better odds of being believed. It was Fowler who finally got justice. As a result of a corporate investigation she triggered, the once untouchable Michael was finally forced to leave, and Kalanick was finally forced out.

Speaking out is not fun. But this is the only way this sh-t ever ends. One woman at a time standing up to a hostile environment, and all of us supporting her. There’s a pro-woman management theory that’s popular right now called “Shine Theory,” where women are encouraged to amplify other women when they make a smart point in a meeting . . . the kind of points men typically take credit for. This is the more aggressive form of counteracting that. When a woman comes forward, you stand up and take the arrows with her.

From the book A Uterus Is a Feature, Not a Bug: The Working Woman’s Guide to Overthrowing the Patriarchy. Copyright (c) 2017 by Sarah Lacy. To be published on November 14, 2017 by Harper Business, an imprint of HarperCollins Publishers. Reprinted by permission. 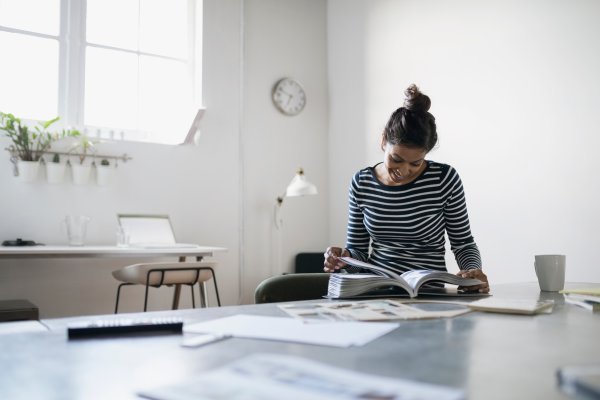 Don’t Love Your Day Job? Start a Side Hustle
Next Up: Editor's Pick