Forget the Turkey. Try These Thanksgiving Main Courses Instead

Thanksgiving dinner usually means turkey, the holiday’s traditional main dish. But while turkeys are versatile birds that can be prepared in countless ways, from dry brining to deep frying, they are not always the right main course for everyone. Some people prefer juicier birds or heartier cuts of meat, while others are vegetarians who often end up mostly eating side dishes.

According to professional chefs who spoke to TIME, there are several delicious options to serve at Thanksgiving in place of turkey. Here are a few alternatives:

Thanksgiving dinners vary in size, and if your dinner party is on the smaller side, a whole turkey could be too much for the crowd. Roast just a portion of the bird, or look into other kinds of fowl your guests can enjoy.

“A lot of people don’t have a lot of guests,” says Alex Guarnaschelli, chef at New York City’s Butter and a recurring judge on Chopped. “I would recommend a guinea hen or a Cornish game hen. It’s also OK to serve roast chicken.”

Michael Solomonov, chef at Zahav in Philadelphia, recommends capons, roosters that are castrated before reaching sexual maturity to yield high-quality, flavorful meat. April Bloomfield, the chef behind New York City’s The Spotted Pig and The Breslin, is not too “keen on turkey,” and often serves roasted duck glazed with balsamic vinegar and lemon juice instead.

Smaller birds are also easier to handle when life gets busy during the holidays. Indianapolis restaurateur Martha Hoover says duck will be the centerpiece of her “unusual” Thanksgiving dinner because her daughter is scheduled to have a baby around the same time. Instead of cooking a large bird, Hoover’s family has opted to pick up a Peking duck from their favorite Chinese restaurant and accompany the dish with fried rice and scallion pancakes.

To Barefoot Contessa host Ina Garten, Thanksgiving is all about tradition — modify an old family recipe to fit into your holiday routine and current surroundings. For example, if Thanksgiving this year is in Florida by the coast, consider serving a seafood dish your family loves.

“It has to be something that’s unique and just for that holiday,” Garten says. “While it might not be exactly what your mother or grandmother used to make, I think it should be some version of that.”

Vegetarians are often relegated to feasting on side dishes at Thanksgiving, including Brussels sprouts, mashed potatoes, stuffing and corn. While most chefs can agree that the holiday’s side dishes are the secret to Thanksgiving success, there’s always more you can do to accommodate guests who don’t eat meat.

Guarnaschelli suggests making vegetarian options vegan when possible, so that everybody feels comfortable. For a main course, try marinating cauliflower steaks in coconut milk for a vegan dish that he says even meat enthusiasts will love.

Chef Guy Fieri, host of Diners, Drive-Ins and Dives, typically adds a variety of lasagnas to his Thanksgiving menu, including one with red sauce, one with greens and one with pesto. Making lasagna is a great way to “get the kids involved” and spend time with family, Fieri says.

“If I’m not going to serve a bird at all, it would be ham. I know that’s really ‘Easter’ but I like ham at Thanksgiving,” says Mashama Bailey, chef at The Grey in Savannah, Ga.

Prime rib and pork roast are also excellent substitutes, chefs say. Fieri often adds prime rib to his menu because it doesn’t require too much attention. “Anything you can cook low and slow is good,” he says. “This is a great time to fire up the oven and warm the house.” 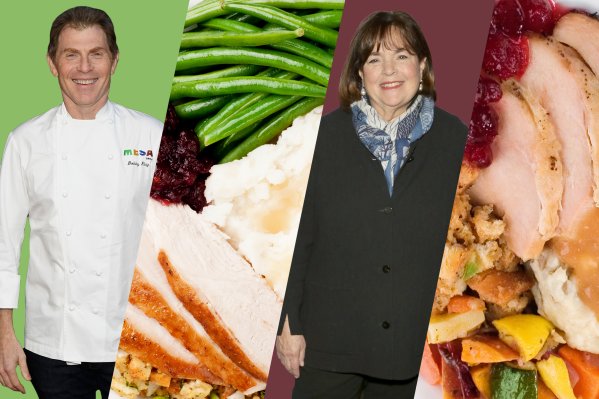 Celebrity Chefs Want You to Avoid These 9 Thanksgiving Mistakes
Next Up: Editor's Pick