The father of a Penn State sophomore who died after a fraternity hazing incident said Monday that he wants to see members of the fraternity punished, as prosecutors announced new charges in his son’s death.

“It’s time to man up, fellas, and be held accountable for your actions,” Jim Piazza said at a press conference on Monday. “We are making holiday plans without our son Tim because of your actions. If you did not commit the acts you did, we would not be here today, and we would be anxiously awaiting Tim’s return home for Thanksgiving break on Friday. Instead we are asking, how do we make sense of the obvious void at our Thanksgiving table?”

Tim Piazza died in February after being forced to drink a toxic amount of alcohol in an alleged hazing ritual called “the gauntlet” and then falling repeatedly, sustaining traumatic injuries to his brain and spleen.

Centre County District Attorney Stacy Parks Miller filed new charges on Monday against an additional 12 members of the now-defunct Beta Theta Pi chapter at Penn State. The charges, which range from involuntary manslaughter to furnishing alcohol to minors, came after investigators recovered surveillance video that had been deleted. A total of 27 defendants now face charges in Tim Piazza’s death, which defense attorneys have described as a tragic accident.

Read Jim Piazza’s remarks from the press conference on Monday: 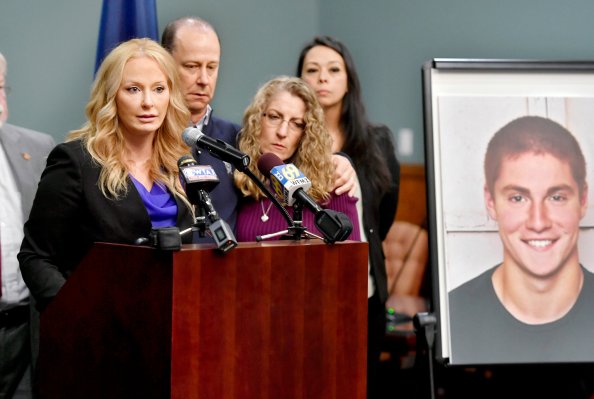