Thieves won't always steal the possessions you would expect.
Pierre Wayser—Getty Images/Flickr Select
By Thomas C. Frohlich
The ABC show introduced a new character in its season finale — and she looks familiar

Cars, smartphones, jewelry and cash are among the many valuable items most people expect thieves to target. As a result, Americans take precautions to keep such possessions safe. Not many, however, would think to lock up their Nutella, pregnancy tests or Tide laundry detergent. Yet, these everyday, ordinary household products are among the most commonly stolen goods.

Some stolen items seem unusual because their value is not easily visible. For example, thieves steal catalytic converters for the platinum. Frank Scafidi of the National Insurance Crime Bureau (NICB) gave the example of manhole covers, as well as a variety of other metal objects, that are often stolen to be resold as scrap metal. Incidents of these kinds of theft have risen considerably, likely due to the rising price of metals like copper, and platinum.

Similarly, the production of maple syrup relies heavily on weather patterns. With poor sugaring conditions in recent years, the price of sap and maple syrup have risen considerably, increasing the potential reward for thieves targeting the product. Another grocery item, steak, has also become more vulnerable to shoplifting due to rising prices.

Another explanation for unusual incidents of theft is unmet demand. In the case of shrubbery theft, for example, collectors are willing to pay large sums for rare and valuable plants –even illegally. Nutella, which is relatively expensive and in high demand, is a commonly stolen product, according to the National Retail Federation (NRF).

According to Rich Mellor, senior advisor at the National Retail Federation (NRF), the “easiest thing to steal is getting stolen, not necessarily for its desirability.” So, while intrinsic value and price increases are important factors, a thief ultimately wants to avoid getting caught.

Procter & Gamble and Arm & Hammer are not the only ones to discover the value in laundry detergent. Thieves have too. This relatively expensive everyday household product is found in nearly every home, which can partly explain its appeal as a stolen good. Consistent demand makes a product much easier to sell. In particular, Tide — a recognized, easy to spot brand — is traded on a regular basis for drugs, other illicit items, and sometimes right back to stores looking for better profit margins. Additionally, the lack of serial numbers on the packaging makes detergents very difficult to track.

Among organized retail crime gangs allergy medicines in particular have become quite popular, according to a 2013 crime survey conducted by the NRF. Part of the value of allergy medications may be the consistently high demand for the product, as many people suffer from allergies. According to Rich Muller at the NRF, however, people are often more willing to suffer through allergy symptoms than buy antihistamines. As a result, a cheaper, boosted product has more success among consumers. While recreational use of antihistamines could be another explanation, stolen allergy medicines are re-sold primarily for intended use.

Pregnancy tests were among the most shoplifted items last year, according to the NRF. Younger thieves may lift pregnancy tests to avoid embarrassment. According to the NRF, however, the tests are targeted by organized crime groups for their resale value. Like detergent, demand for this product is so consistent that they can be sold for near-retail prices.

Among the base metals popular at scrap yards are platinum, rhodium and palladium, all of which can be components in catalytic converters. The price of these metals has risen considerably in recent years, which may partly explain the rise in catalytic converter theft. Platinum prices, for example, have risen substantially, from around $1,000 per ounce five years ago to just under $1,400 per ounce this month. Catalytic converter theft has become so widespread in places like California, that the state passed laws that mandate documentation of the car part’s sales. According to Frank Scafidi of the NICB, however, there is only so much legislation can do without proper enforcement. Recyclers can easily recognize when they are dealing with criminals, but have little incentive to turn them away.

Weighing more than 300 pounds in some cases, and typically located on lit and visible streets, manhole covers do not seem like a worthwhile steal at first. But in the last few years, as base metal prices have risen, so have thefts of manhole covers. Thieves have been known to disguise themselves as construction workers and make off with the large discs single-handedly. In countries such as Colombia, where stealing manhole covers has become quite common, thieves have customized trucks with holes in the floors to steal the covers more discreetly. In addition to the costs incurred by utilities and municipalities from these thefts, missing manhole covers cause considerable danger to the public. Relatively high prices for base metals such as iron have encouraged thieves to commit a variety of other unusual crimes, including the theft of fire hydrant caps, gravesite vases, and stadium bleachers, likely to be sold for scrap. Manhole covers are typically made of iron, while many other valued items contain copper, also coveted among thieves, as its price has roughly doubled since 2009. The metal is essential in plumbing, electrical systems, and fiber optics. 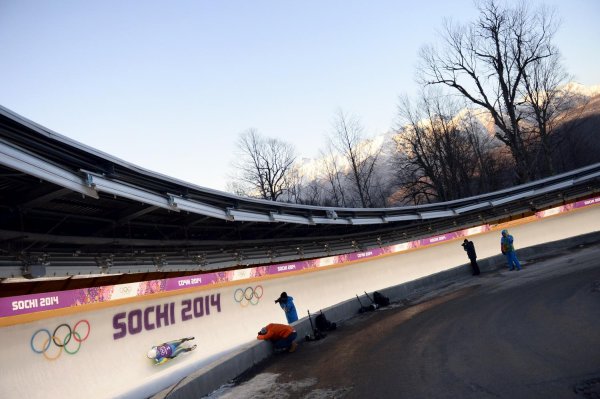 Olympics on TV, Online and in Apps: How to Catch All the Action
Next Up: Editor's Pick