When I was elected DNC Chair in February, I said that a united Democratic Party would be our best hope and Donald Trump’s worst nightmare. Last week, we proved it.

From coast to coast, voters showed up and cast their ballots for Democrats. The results were historic. Not only did we win by huge margins in the two governors’ races, we also saw a groundswell of support for Democrats down the ballot. In Virginia, we flipped 15 seats from red to blue – the biggest Democratic pickup in the commonwealth since the late 19th century.

But it wasn’t just Virginia and New Jersey. We picked up two state House seats in deep-red districts in Georgia and won another two seats in New Hampshire, while Manka Dhingra’s victory in the Washington state Senate flipped control of the chamber to the Democrats. And we secured critical victories in mayoral races from Charlotte to St. Petersburg.

We also elected leaders that represent the great diversity of our nation – from the first two Latinas to serve in the Virginia House of Delegates to the first African-American lieutenant governor in New Jersey, the second African-American elected statewide in Virginia, and the first openly transgender person ever to be elected and seated as a state legislator in U.S. history. In fact, the full list of newly elected Democrats who broke down barriers and made history is far too long to print here.

All of these victories build on our success over the last year in special elections. We’ve now flipped six Republican seats in New Hampshire since the beginning of 2017, and won three special elections in Oklahoma.

So how did we do so well? It wasn’t inevitable. It wasn’t a fluke or a matter of luck. And it certainly wasn’t because Donald Trump and Republicans got “tired of winning.”

Democrats won because we organized. We had a strategy, we executed it, and we won. We didn’t wait until a few weeks before Election Day; we got on the ground early and invested in races up and down the ballot. We invested six figures in New Jersey and another $1.5 million in Virginia, building new digital and data tools and deploying 40 diverse organizers to engage millennials, African-Americans, Latinos and the AAPI community.

This wasn’t politics as usual. We went back to basics. Instead of focusing on the sexy races at the top, we lifted up the entire Democratic ticket. Instead of spending money on television ads, we put all of our time and resources into talking directly to voters and building the DNC’s biggest-ever grassroots field operation in Virginia.

To give some perspective: Terry McAuliffe’s gubernatorial campaign in 2013 knocked on an impressive 500,000 doors. This year, we doubled that number, knocking on more than a million doors to get out the vote for Governor-elect Ralph Northam, Lt. Governor-elect Justin Fairfax, Attorney General Mark Herring, and Democrats across the state.

And we didn’t do this alone. We worked closely with state parties and built meaningful and unprecedented partnerships with our sister committees – the Democratic Governors Association, the Democratic Attorneys General Association, and the Democratic Legislative Campaign Committee – as well as over 30 progressive groups working in the Commonwealth of Virginia to get Democrats elected – from groups like Planned Parenthood to newer organizations like Indivisible.

Together, we led with our values and took our message of inclusion and opportunity directly to the voters. And the American people responded. They rejected the Trump agenda, which would take away people’s health care, cut taxes for millionaires and corporations at the expense of the middle class, and tear apart communities through travel bans and mass deportations. And they put their faith in Democrats to create more good-paying jobs, expand opportunity, and fight for equality for all people.

We organized around Democratic values and a winning strategy. That’s how we won. And that’s how we’ll win in 2018. The Democratic Party is back and I couldn’t be prouder of the work we’ve done over the last nine months to get to this point.

But this is just the beginning. On Tuesday, we put Republicans in every ZIP code on notice. As long as we’re united, and as long as we continue to organize, invest, and lead with our values, we’ll be unstoppable. 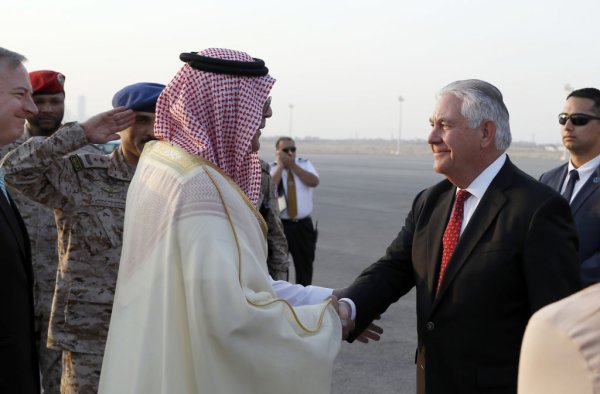 The U.S. Used to Be A Good Wingman in the Middle East
Next Up: Editor's Pick