A fifth accuser has come forward against Alabama Senate candidate Roy Moore, alleging that he sexually assaulted her when she was a minor.

The woman, Beverly Young Nelson, appeared at a press conference Monday in New York City and described how Moore sexually assaulted her when she was a teenager and working as a waitress at a restaurant he frequented.

Nelson said that she was 15 when she began working at the Olde Hickory House, a restaurant in Gadsden, Ala. Nelson said that, initially, Moore’s behavior consisted of complementing her on on her looks and occasionally pulling her hair when she would pass him, but she didn’t think anything of it. “I had a boyfriend…even if I had not had a boyfriend I was not interested in having a dating or sexual relationship with a man twice my age,” she said Monday.

Nelson also said that Moore signed her yearbook when she brought it into work one day. The signature read “to a sweeter, more beautiful girl I could not say Merry Christmas. Love Roy Moore, D.A.” Allred held up a copy of the yearbook that contained the signature at the press conference.

One night in December 1977, a month after Nelson turned 16, her boyfriend was late to pick her up after her shift, and Moore offered to drive her home. Nelson accepted the ride, explaining that she trusted Moore because he was the District Attorney. But she described how, once they were in the car, he drove to a dark and deserted area behind the restaurant, and began groping her when she asked what was happening. She tried to leave the vehicle, she said, but Moore locked the door, and started squeezing her neck, forcing her head toward his crotch and trying to pull her shirt off. “I thought he was going to rape me. I was twisting and struggling and begging him to stop,” she said, choking up at the recollection.

Moore, in a brief press conference Monday night, dismissed the allegation as a “political maneuver” ahead of his Dec. 12 special election.

The newest accusations come less than a week after the Washington Post reported accounts from four women detailing how Moore had pursued them romantically when they were teenagers and he was in his thirties. One of the women, Leigh Corfman, said she was 14 when she met Moore sitting outside a courtroom with her mother before a child custody hearing, and that she and Moore began seeing each other before he initiated sexual contact. Another woman, Gloria Thacker Deason, told the Post that Moore bought her alcohol on dates when she was underage.

Nelson said that Moore ultimately capitulated after she fought him that night but warned of repercussions should she speak out. “He then looked at me and said, you are the child. I am the District Attorney of Etowah County. If you tell anyone about this, no one will believe you,” she recalled.

Although Nelson had bruises from the encounter, she used makeup to cover them up. She quit her job and remained silent until two years after the incident, at which point she told her sister. She has also told her mother and her husband.

“I would probably have taken what Mr. Moore did to me to my grave, had it not been for the courage of four other women that were willing to speak out about their experiences with Mr. Moore,” Nelson said.

Allred, whose past and current clients include women who have alleged harassment against Bill Cosby, President Donald Trump, and Harvey Weinstein, said that Nelson reached out to her after the Post story was published. Allred is calling for the Senate Judiciary Committee to hold a public hearing where Nelson and Moore can both testify under oath.

Moore has repeatedly denied the allegations in the Post, blasting them as “fake news” and even threatening to sue the Post. He acknowledged in a radio interview with Fox News’ Sean Hannity that he knew Deason and another woman cited in the Post’s report, Debbie Wesson Gibson, but said he did not recall pursuing them romantically, and did not know Corfman.

Moore’s campaign chairman, Bill Armistead sent out a release just minutes before Allred’s presser was slated to begin, calling the attorney “a sensationalist leading a witch hunt” and reiterating the candidate’s innocence.

“Judge Moore is an innocent man and has never had any sexual misconduct with anyone,” Armistead said. “Let it be understood, the truth will come forward, we will pursue all legal options against these false claims and Judge Moore will be vindicated.” 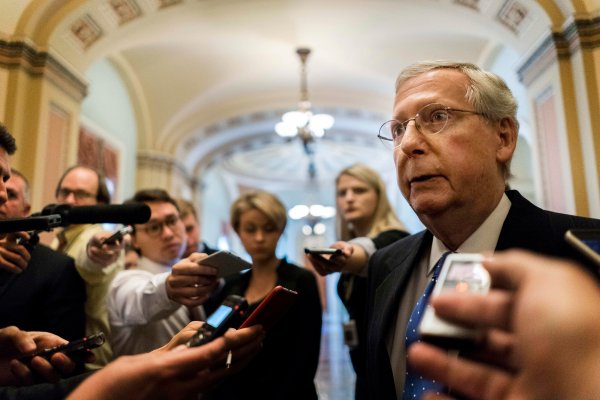 'I Believe the Women.' Even More Republicans Want Roy Moore to Step Aside
Next Up: Editor's Pick