J.K. Rowling Has the Perfect Writing Advice For Anyone Struggling to Finish a Project

Add “motivational Tweeter” to the list of job descriptions for J.K. Rowling.

Over the weekend, the famous Harry Potter author — who’s the highest-paid author in the game, joined by masters of drama and thriller like James Patterson and Stephen King — made use of her social media platform to help build up a fellow writer who was struggling to complete a book.

“I want to write like @jk_rowling or @StephenKing but it’s too hard for me,” the French writer — who goes by the Lord of the Rings-inspired name Roi-Sorcier d’Angmar on her Twitter account — initially tweeted. “I’m demotivated. I’ll never finish my book.” You’d think that, with over 13 million followers, Rowling would be far too inundated with Twitter mentions to see this plea for help. But somehow she noticed it, and sent back the perfect response. “Don’t write [like] me. Write like you. Nobody else can do that. Finish that book,” Rowling said.

Now, the French writer has a veritable army of supporters in her corner urging her to finish the book — and, thanks to Rowling’s backing, she might even find some new readers for her first work as well.

Thanks to all that support, she’s made an online promise to finish the book after all. Looks like all she needed was a few magic words from the Wizarding World authority herself. 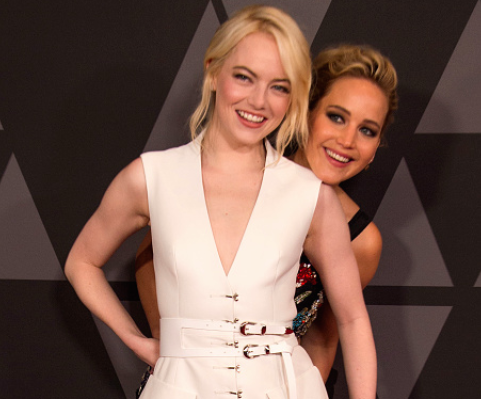 Jennifer Lawrence and Emma Stone Embodied Friendship Goals at the Governors Awards
Next Up: Editor's Pick