President Donald Trump had a little trouble figuring out an awkward group handshake with world leaders at the Association of Southeast Asian Nations (ASEAN) summit on Monday – and people on Twitter noticed.

Trump was standing on stage at the Manila summit alongside leaders including Philippine President Rodrigo Duterte, Russian Prime Minister Dmitry Medvedev and Vietnamese Prime Minister Nguyen Xuan Phuc when they crossed their arms for a traditional group handshake.

Video of the moment shows the U.S. president looking slightly bewildered as everyone else around him took hands. At first, he grabbed Xuan Phuc’s hand with both of his. Then, a couple of seconds and a few funny faces later, Trump realized his mistake and switched his hands over to join in with the group shake. The internet was quick to respond:

In another strange and candid moment from the ASEAN summit, Duterte – who recently said he stabbed someone to death when he was a teenage because of “a look” – sang a Filipino love song “on the orders of Donald Trump” shortly before the summit.

In a meeting Monday, Trump praised Duterte’s hospitality and said nothing about human rights, including the thousands killed in the country’s blood drug crackdown. The two men also shared a laugh in the meeting when Duterte called reporters “spies,” the Associated Press reports.

The awkward moment at ASEAN is not the first time that Trump has made headlines for a handshake. French President Emmanuel Macron’s knuckles famously turned white after he shook Trump’s hand at the NATO summit in May and in July the pair had a lengthy 25-second handshake as they marked the end of Trump’s trip to France.

Trump also famously shook Japanese Prime Minister Shinzo Abe’s hand for 19 seconds during an official meeting and held hands with British Prime Minister Theresa May as they walked along the colonnade of the White House. 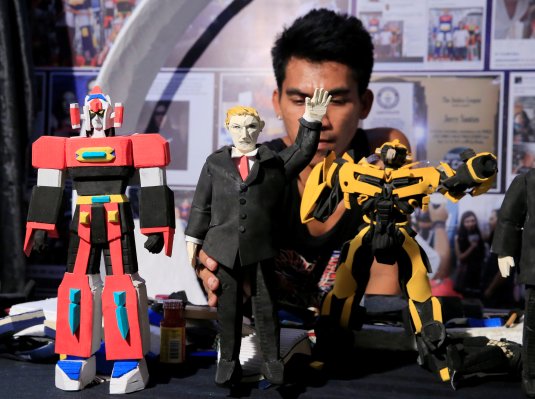 An Artist Made a Donald Trump Doll Out of Flip-Flops
Next Up: Editor's Pick