On the season finale of Last Week Tonight, John Oliver turned his gimlet eye on his favorite topic, Donald Trump or, as Oliver calls him, “the man voted least edible by Cannibal Magazine for the last six years in a row.”

While Oliver bemoans the amount of attention that he has spent on Trump, “His presidency is like one of his handshakes, it pulls you in whether you want it or not.” In his look back over at Trump’s first year in office, Oliver looks at the norms that Trump has broken—like never releasing his tax returns, hiring his daughter and son-in-law to work in the White House, and never putting his companies in a blind trust—as well as his transcripts.

“It is staggering how incoherent he is,” says Oliver after reading a transcript. “That is a drunk driver crashing a pick-up truck full of alphabet soup.”

While those broken norms are frustrating, according to Oliver, there are three things that Trump does that could permanently harm American politics. He undermined the media by crying “fake news” and governs by trolling. According to Oliver, Trump also uses “whataboutism” or the practice of changing the subject to someone else’s perceived wrongdoing, which Oliver describes as an “old Soviet propaganda tool” of creating false moral equivalency.

“There is nothing new about any of these techniques, but they are now coming out of the Oval Office,” explains Oliver, who notes that these changes are insidious and hard to notice, like being “murdered by a sloth—it happens very slowly and you might not notice until it’s too late.”

While the last year has seemed long, according to Oliver, “The Trump presidency is basically a marathon—painful, pointless, and the majority of you didn’t agree to run, but were signed up by your dumbest friend.” 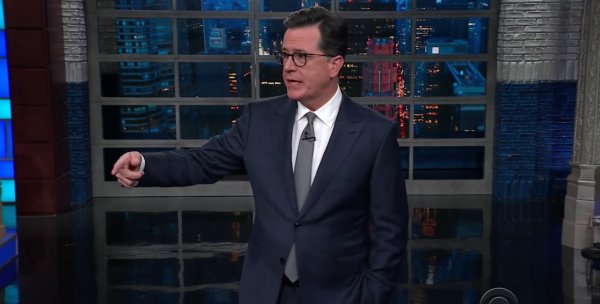 Here's How Stephen Colbert Explained Why Louis C.K. Wasn't on The Late Show
Next Up: Editor's Pick